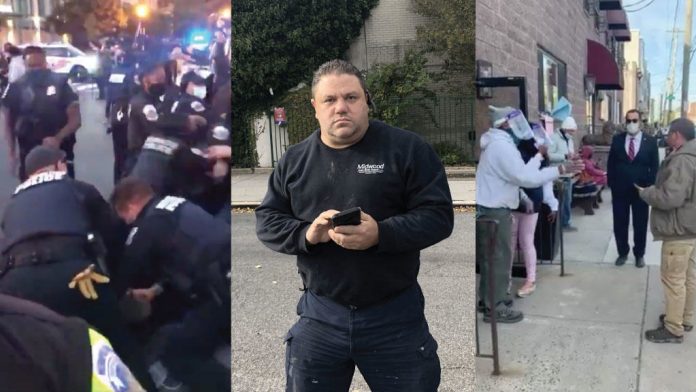 Despite threats of widespread voter repression, violent fake news and public violence, US Election Day on November 3 went generally without incident. However, tensions ran high in polling stations and on the streets, with voters capturing scenes of confusion, incidents of voter intimidation and quarrels with police in protests from Portland to Washington, DC.

In the days leading up to November 3, voters and business owners were preparing for the worst. Freeway blockades in the Democratic states of New York and New Jersey by Trump vehicle convoys on Nov. 1 and the surroundings of a Biden campaign bus of Trump vehicles in Texas on Oct. 31 had experts worried about intimidating voters.

Although riots and coordinated attempts to elect intimidators did not take place, the excitement of a historic and highly polarized election was felt in the polls. In a Twitter video posted by attorney and editor Will Chamberlain and widely shared among Republicans, two masked people in a polling station in Philadelphia mistakenly prevented Gary Feldman, a Republican voting observer, from entering. The video shows Feldman showing his district monitoring certificate and claiming his right to be present, while his interlocutors insist that the certificate is not valid for this polling station specifically.

In a follow-up Twitter post, Guardian reporter Sam Levine wrote that he spoke to the electoral judge at that polling station, explaining that the incident was a “misunderstanding” in a “crowded and stressful time” and that the pollster was eventually allowed in. .

Cases of voter intimidation were scarce and isolated

Although there were no signs of significant intimidation of voters on election day, several isolated cases were recorded. In Charlotte, North Carolina, police detained an armed man loitering in front of a polling station and returning there after being asked to travel earlier in the day.

Another case of election threats occurred in Brooklyn, New York, where a man standing next to a jeep decorated with Trump flags walked aggressively in front of a polling station, shouting and swearing at passers-by.

He is within 100 feet and has been trying to scare people on the sidewalk at MS88 in Brooklyn. The NYPD drove by, which is ironic considering they are closing volunteers to provide coffee in Red Hook, but do not think it is electoral drive. pic.twitter.com/foXxgUDe4V

Whitney Hu 胡安 行 (@whitney_hu) November 3, 2020 Kristen Clarke, president and director of the Law Committee on Civil Rights under Law, a national civil rights organization that manages election protection hotlines in English, told Jowharobservers that the organization has not seen major systemic problems or attempts to block voters from isolated and sporadic events. According to Clarke, the hotline from kl. 15.50 Eastern time on election day received 22,000 calls, excl. Online and SMS reports. The majority of calls came from Pennsylvania (12 percent of all calls), then Texas (10 percent), Florida (7 percent), New York State (7 percent) and Michigan (6.5 percent).

On election night, hundreds of protesters gathered in cities like Washington, DC and Portland for demonstrations that were mostly non-violent but tense, punctured by cases of aggression and fights with police. In DC, hundreds of people began to gather in front of the White House late in the afternoon. In the evening, protesters with various political reasons marched through the streets of the capital. A Twitter video posted by host and reporter Elijah Schaffer shows a large group of black-clad Antifa protesters holding a banner that reads “Burn down the American plantation” and shouts “F * ck Trump, F * ck Biden”.

They have gas masks, weapons and some have shields pic.twitter.com/xKJulu0zZ3

There were several fights with local police, as seen in this Twitter video by user Andrew Derek, where officers pinned a man to the ground and tried to disperse the crowd. According to NBC Washington, three people were arrested that night in two separate incidents.

The outlet also reported that four people were stabbed near the White House early in the morning after election night. The victims claimed to be members of the Proud Boys, a far-right, pro-Trump group, and said their attackers were Black Lives Matter protesters. No arrests have yet been made and the victims are currently being treated for injuries that are not considered life-threatening.

In Portland, hundreds took part in protests against police brutality, President Trump and Portland Mayor Ted Wheeler, who were mostly non-violent, though tense. Despite the lack of activity from groups like the far-right Proud Boys, The Oregonian, a local newspaper, reported that some protesters were burning an American flag and carrying open arms. This Twitter video by host and reporter Drew Hernandez shows a protester carrying a sword on his back.

On November 2, just before the election, Portland protesters also smashed windows in a local Starbucks and poured flammable liquid inside. Officers at the Multnomah County Sheriff’s Office called the incident a “potential arson” and have detained two suspects.

… Individuals smashed windows and poured flammable liquid inside the company. Officers interrupted a potential arson. This collection is still declared an illegal assembly due to criminal activity. Spread to the south and west. pic.twitter.com/NSsjOETtbZ