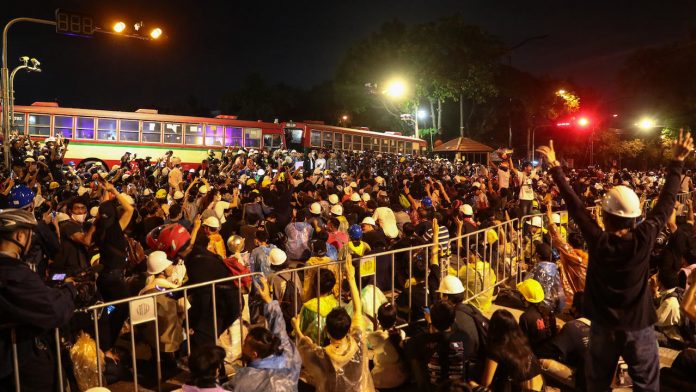 Thai protesters on Wednesday gave Prime Minister Prayuth Chan-ocha a three-day deadline to resign or face more demonstrations, but the leader who made the statement was arrested within two hours.

Prayuth had previously said he was ready to lift emergency measures he introduced last week to stop the protests as a step to “de-escalate” the situation.

Tens of thousands of people marched to his offices at Government House. Protesters have been protesting against Prayuth for months, demanding curbs on King Maha Vajiralongkorn’s powers.

They claimed success after handing over a mock resignation letter to Prayuth to an official outside.

She was subsequently arrested on charges that police said were related to a protest on Oct. 15, and joined a list of dozens of activists picked up in the past two weeks. Her lawyer said she was charged with violating emergency measures.

When Patsaravalee was taken away, she said, “I’m not worried. This is the government’s game. ”

In a televised speech, Prayuth had said he was ready to repeal measures banning political gatherings of five or more people and publishing information deemed to threaten security.

“I want to take the first step to de-escalate this situation,” Prayuth said.

“We must now step back from the edge of the slippery slope that can easily slip into chaos,” he added, saying the negotiations should go to parliament, where his supporters have a majority.

The protests have been the biggest challenge for Thailand’s establishment for years and have drawn the most open opposition to the monarchy for decades despite majestic laws having jailed for up to 15 years for insulting royalty.

Most demonstrations so far have been peaceful, but police used water cannons against protesters on Friday, further fueling anger among government critics.

The rebel police briefly held Wednesday’s march at some point before letting the crowds through.

Protesters say Prayuth conducted an election last year to retain power he seized in a coup in 2014. He says the election was fair. Protesters accuse the monarchy of enabling years of military dominance.

The palace has a policy of not commenting on the media.

Prayuth said protesters should wait for parliament’s emergency next week if the entire upper house is appointed by his former junta.

“The protesters have made their voices and views heard,” Prayuth said. “It is now time for them to reconcile their views with the views of other sections of Thai society.”

Many Thai royalists and anti-government protesters confronted each other earlier at Ramkhamhaeng University.

The yellow-shirted royalists marched on student protesters, and the two sides shouted abuse at each other. Some threw water bottles and other objects before the students withdrew and police stepped in to separate the sides.

“I beg you, do what you want, but do not touch the monarchy,” one of the royalists, Sirimongkol Ruampan, 24, told Reuters. “I do not believe in violence. I pray again, do not bring the monarchy into politics. ”