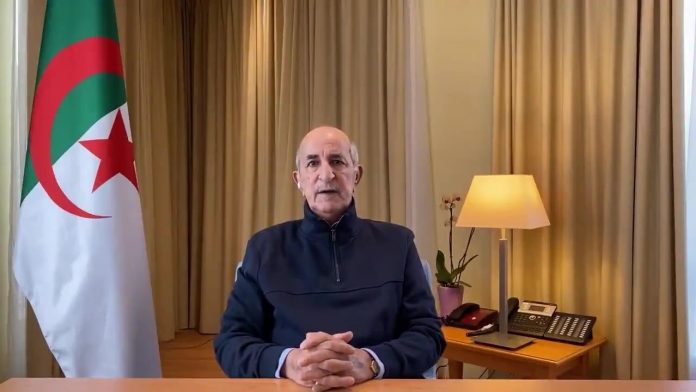 Algerian President Abdelmadjid Tebboune said on Sunday that he was recovering from Covid-19 disease in his first television appearance since he was hospitalized in Germany almost two months ago.

“Thank God … I have started on the road to recovery,” the 75-year-old said one day after the first anniversary of his election.

“It may take two or three weeks but, God willing, I will regain all my physical strength.”

The video was broadcast on state television and published on Tebboune’s Twitter feed.

He did not indicate his location, but his Twitter feed indicated that he was outside Algeria.

Tebboune, a heavy smoker, was hospitalized in Germany on October 28 and the Algerian authorities later announced that he had Covid-19 disease.

His absence had raised concerns about an institutional crisis, weeks after voters approved a revised constitution on record turnout in a referendum widely seen as a maneuver to neutralize the protracted Hirak protest movement.

Tebboune has not been able to sign the revised constitution in law because he has to be on Algerian soil to do so.

But he said on Sunday that he was following developments in Algeria “day by day, if not hour by hour”, and noted progress in reducing the country’s daily number of coronavirus infections.

Visibly thinner than before and in a casual jacket, he was sitting at a desk next to an Algerian flag.

Last month’s constitutional referendum, in time to coincide with Algeria’s 1962 independence from France, was seen as an attempt to increase Tebboune’s legitimacy.

But with the president abroad and Hirak calling for a boycott, the vote saw even lower turnout than the election that brought Tebboune to power.

His absence came as Algeria faces a severe recession due to the coronavirus pandemic and a gaping budget deficit due to low crude prices that have reduced the country’s important oil revenues.

Tebboune has promised to fight for a “strong and diversified” economy and work to wean the country from oil.

He promised Sunday that “no low-income citizen will suffer new taxes.”

Tebboune has also reached out to the “blessed” Hirak, who staged over a year of mass protests until it was forced to suspend them among coronavirus restrictions earlier this year.

But his administration has monitored a counterattack of disagreement.

The prisoners’ rights group CNLD says that about 90 activists, users of social media and journalists are currently in custody, mainly for posts on social media.

“But he has not been able or has not know how.”