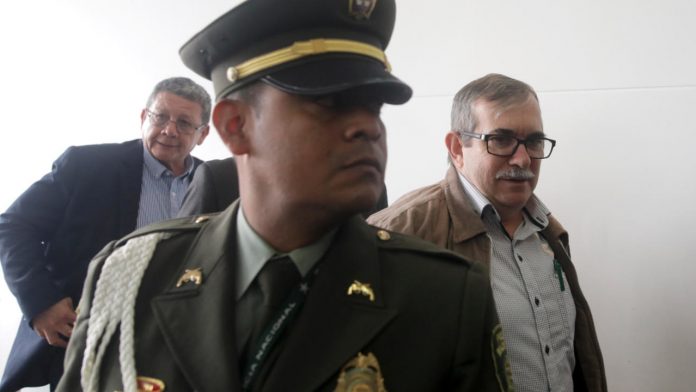 The eight belonged to the FARC Secretariat, its highest decision-making body, and include Rodrigo Londono, now head of the Common People’s Party, the political party that emerged from the FARC following the signing of the 2016 Peace Pact, which largely ended more than 50 years of fighting. .

Also targeted are Pablo Catatumbo and Julian Gallo, who occupy two of the ten seats reserved for the militant group-transformed political party under the peace agreement.

Another member of the FARC High Command, Ermilo Cabrera, is also on the list, but he died on Wednesday.

“Depriving people of their liberty and setting conditions for their release is a war crime, especially taking hostages,” said Judge Julieta Lemaitre of Colombia’s special jurisdiction for peace, a court set up to try FARC members and soldiers for crimes committed during the conflict.

The complaint also includes crimes against humanity and “other war crimes related to the treatment of hostages, such as murder, torture, cruel treatment, attacks on personal dignity, sexual violence and forced relocation,” the decision said.

The decision – the tribunal’s most far-reaching since its creation in 2017 – was taken after hearing testimonies from 257 former combatants and more than 1,000 kidnapping victims and taking into account information gathered by prosecutors.

John Jairo Hoyos, whose father was abducted by the FARC in 2002 and then murdered, praised the “excellent decision”.

“This gives me hope that this country, we can one day find peace, that the principle of not repeating this will be respected and that those who have been given the opportunity to rejoin civilian life will fulfill their obligations under the peace agreement,” he said. to AFP.

The Common People’s Party reiterated its remorse for past actions and agreed that there was no “justification for depriving any person of their liberty.”

Colombian President Ivan Duque said: “We can not have a double standard in Colombia where people who commit crimes can never again participate in Congress but others hold their seats despite beliefs about crimes against humanity.”

And retired General Luis Mendieta, himself held hostage by the guerrillas for 11 years, said “while there is no compensation, there is no justice”, and demanded “guarantees” that such crimes would not be committed again.

In 2018, Duque led a failed attempt to change the peace agreements to secure tougher penalties for former FARC fighters.

During its long struggle for power, the FARC kidnapped people to blackmail financial and political settlements.

The indictment states that 21,396 people were deprived of their liberty by FARC fighters between 1990 and 2016, “a number significantly higher than previously thought.”

Many, including soldiers, police officers or politicians such as the French-Colombian Ingrid Betancourt, spent as many as ten years locked up before being rescued or liberated.

The court document states that nine percent of the hostages were never seen again, and another three percent were confirmed murdered and had their remains sent to their families.

Former FARC fighters who plead guilty to the charges will not be imprisoned but will receive an alternative punishment under the negotiated rules.

Those who reject the accusations will be subjected to a criminal trial and risk imprisonment for up to 20 years.

Last Sunday, the FARC officially changed its name to the Common People’s Party to move away from the acronym that identified the Marxist rebel force for decades.

Following the Peace Pact in 2016, the revolutionary armed forces in Colombia merged into a political party called the Common Alternative Revolutionary Force – both of which left the FARC.

The former rebels have been divided since their disarmament.

Despite the fact that the majority of about 13,000 former FARC fighters and militiamen accepted the peace agreement, dissident factions have continued or withdrawn weapons.