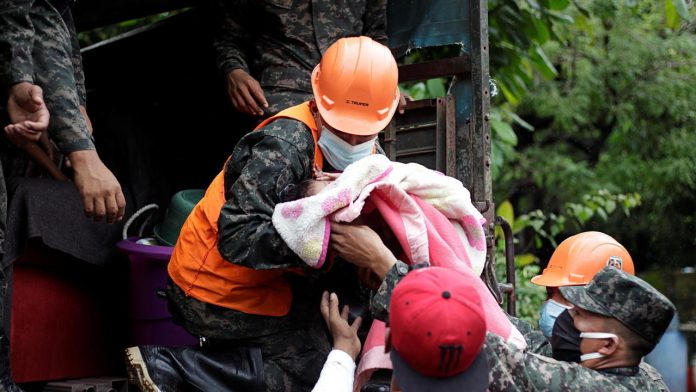 By noon (1800 GMT), winds had dropped to 105 km / h when Iota weakened to a tropical storm, the US National Hurricane Center (NHC) said. But Iota continued to bring down heavy rains as it moved inland toward southern Honduras.

“We are flooded everywhere, the rain lasted almost all night and now it stops for an hour and then comes back for two to three hours,” said Marcelo Herrera, mayor of Wampusirpi, a municipality in the interior of northeastern Honduras crossed by rivers and streams. .

“We need food and water for the people, because we lost our crops with Eta,” he told Reuters.

The double punch of Eta and Iota marked the first time two major hurricanes were formed in the Atlantic in November since records began. The port of Nicaraguan in Puerto Cabezas, still partially flooded and littered with debris left by Eta, once again bore the brunt of the hit.

“We can die,” Inocencia Smith told one of the patrons. “There is nothing to eat at all,” she added, noting that Eta had destroyed local farms.

The wind tore the roof off a makeshift hospital. Patients in intensive care were evacuated, including two women born during the first rains on Monday, the government said.

Guillermo Gonzalez, head of Nicaragua’s disaster management agency SINAPRED, said he had received reports of damage to houses and roofs, fallen power lines and redundant rivers, but no deaths.

Two people died on the island of Providencia, part of Colombia’s Caribbean archipelago off the coast of Central America, after it was cut by Iota, President Ivan Duque said on Tuesday night.

Another person is missing, Duque said after a visit to the island and promised prompt delivery of humanitarian aid and debris removal.

Almost all of the infrastructure in Providencia – home to about 6,000 people – has been damaged or destroyed.

“We have seen a serious impact on infrastructure,” Duque said on his television broadcast every night. “Society, preventive mechanisms, protection and warnings, meant that there was no significant loss of human life.”

The Panamanian government said one person had died in the western Ngäbe-Buglé region due to storm conditions.

A resident of Brus Laguna on the Honduran coast told local radio that a boy was killed by a falling tree, although Mayor Teonela Wood said she had no reports of deaths.

The International Federation of Red Cross and Red Crescent Societies (IFRC) said that floods from Iota risked disaster after Eta.

“We are very concerned about the potential for deadly landslides in these areas because the earth is already completely saturated,” IFRC spokesman Matthew Cochrane told a news conference in Geneva on Tuesday.

About 40,000 people in Nicaragua and 80,000 in Honduras were evacuated from their homes, authorities said.

In the early afternoon, Iota was about 169 km east of Honduras’ capital Tegucigalpa, the NHC said, adding that Iota could drain up to 76 cm of rain in some areas.

“We are in God’s hands. If I have to climb trees, I will do it,” said Jaime Cabal Cu, a farmer in Guatemala’s Izabal province. “We do not have food, but we will wait here for the hurricane as we ask God to stop coming.”