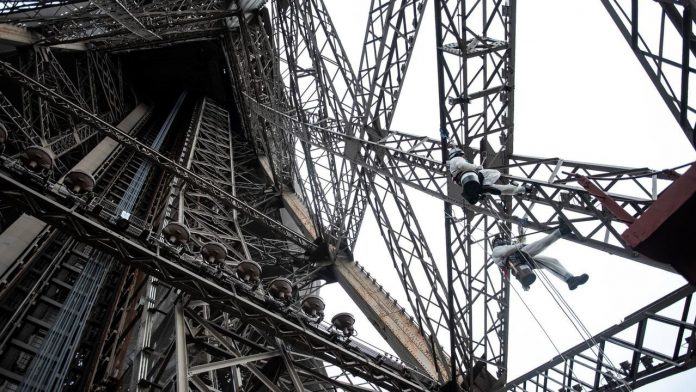 The Eiffel Tower has begun the most extensive renewal of its 130-year history to look its best for the 2024 Olympics in Paris, including with a painting job that gives it a distinctly golden hue.

Not only will layers from the 19 previous colors be removed, but the Paris icon will also lose the signature “Eiffel Tower brown” it has had since 1968.

It will be replaced by a yellow-brown composition that Gustave Eiffel himself wanted for his monument.

“It will give the Eiffel Tower a little more of a golden color than the color we are used to seeing, in time for the Olympics,” said Patrick Branco Ruivo, CEO of the company that operates the tower.

The renovation work for the 324-meter-high tower, with its 18,000 pieces of metal held together by 2.5 million rivets, is monumental and is estimated at 50 million euros (60 million dollars).

Peeling off the old layers is made dangerous by the presence of lead, which requires a strict health protocol for workers.

The Eiffel Tower gets a new color every six years, as much to protect its metal structure from wind, rain, sun and pollution as to maintain its appearance.

The current work started in 2019 and will be ready by 2022 when the new shade of gold – which can currently only be vaguely detected at the top of the tower – will be visible to everyone.

“Why did Gustave choose the Eiffel amber? Probably so that the Eiffel Tower would repeat the whole of Paris with its stone-hewn limestone stones,” said Pierre-Antoine Gatier, chief architect of France’s historic monument, who decided on the color change.

For some of the workers, it is the task of life.

“For the most part, we move like on an adventure course on the treetops,” says Antoine Olhagaray, a 22-year-old tower.

“Not to mention the view,” added his colleague Charles-Henri Piret. “It’s not every day you get to hang a 300-meter rope.”

The Eiffel Tower will play a prominent role in the Paris Olympics in 2024 and serve as a backdrop for triathlon and swimming in open water.

It will also tower over much of the adjacent festivities along the River Seine, where crowds are expected to flock for shows, concerts and other entertainment.