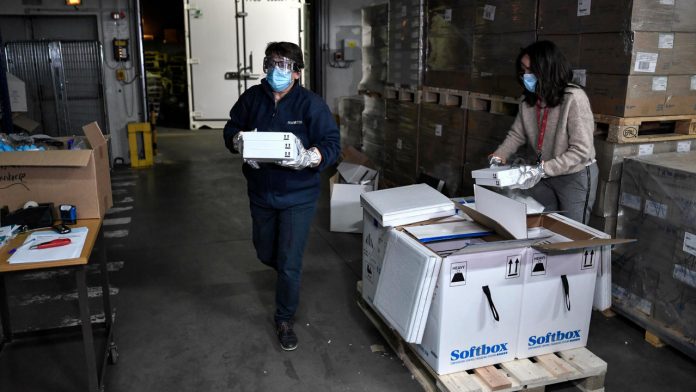 The European Union began expanding vaccines on Saturday, even as countries in the bloc were forced to lock in a new strain of virus, believed to be more contagious, which continues to spread from Britain.

People all over the world are urged to respect guidelines for social distancing, as the World Health Organization urged people not to “waste” the “great, heartbreaking sacrifices” people had made to save lives.

The coronavirus pandemic has claimed more than 1.7 million lives and is still on the rise in large parts of the world, but the recent launch of inoculation campaigns has raised hopes that 2021 could bring a break.

A few hours before the first doses of vaccine arrived in France, the Paris Ministry of Health confirmed late on Friday that it had discovered its first case of the new variant in a citizen returning from the UK.

Several countries have reported cases of the new strain, which has sent shakes through already congested health care services.

The first French case of the new coronavirus variant was found in a British resident who arrived from London on December 19, the French Ministry of Health said.

They are asymptomatic and self-isolating at home in Tours in central France, and contact tracing has taken place for healthcare professionals who treated him.

The new virus strain, which experts fear is more contagious, prompted more than 50 countries to impose restrictions on Britain, where it first emerged.

However, cases of the new variant have still been reported worldwide: on Friday, Japan confirmed five infections in passengers from the UK, while cases have also been reported in Denmark, Lebanon, Germany, Australia and the Netherlands.

# COVID19 has changed our lives and caused tragedy.

But now there is hope. The European Union has invested in research and development of # COVID19 vaccines. We have secured doses for our entire population.

South Africa has detected a similar mutation in some infected people, but on Friday, British claims denied that its strain was more contagious or dangerous than that which originated in Britain.

The closure of the border between the United Kingdom and France for 48 hours led to a bottleneck of up to 10,000 trucks in the south-east of England, with drivers stranded for several days during the festive period.

But the head of the port operator in Calais told AFP that after the port remained open during Christmas in particular, “the situation should be fully taken care of” soon.

Some countries that lost the restrictions somewhat at Christmas have reintroduced them – for example, Austria will see a curfew imposed from Saturday to January 24.

Millions in the United Kingdom have been affected by a tightening of restrictions there – according to the BBC, more than 40% of England’s population is now affected by the most stringent measures – which include closing all non-essential companies and restricting social contacts.

New lockdowns also started in Scotland and Northern Ireland on Saturday, and Wales have also imposed restrictions after relaxing them for Christmas.

More than 25 million infections have been registered in Europe, according to an AFP census on Friday.

Vaccinations in all 27 EU countries will begin on Sunday, after regulators approved the Pfizer-BioNTech vaccine on 21 December.

“Vaccines offer the world a way out of this tragedy. But it takes time for the whole world to be vaccinated.”

Thank you, Your Holiness @ Pontifex, for reminding the world of the importance of solidarity to stop # COVID19 and save lives. We must #CADE together to ensure access to vaccines for people in need, everywhere. Only fair distribution will end the pandemic. https://t.co/BiIZvag5Cs

The pope’s Christmas message also referred to the issue of an appeal for “vaccines for all”.

“I urge everyone, leaders of states, corporations, international organizations, to promote cooperation, not competition, to find a solution for all … especially the most vulnerable and most in need in all regions of the world,” said Pope Francis.