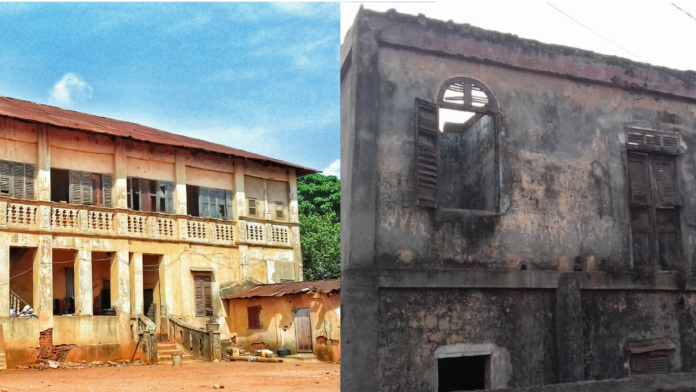 The historic Afro-Brazilian houses that still stand in Porto-Novo, the capital of Benin, are an important part of the city’s history, marked by both the slave trade and colonization. These homes were built more than a hundred years ago, when they were popular with both slaves and wealthy merchants. But today, most homes are abandoned, which means that this important part of history can disappear.

Adjao Ali does not want the city of Porto-Novo to lose an important part of its cultural heritage. On February 8, Ali, a college student who studied English, took to Twitter to post several photos of the city’s Afro-Brazilian home, most of which were built more than a century ago. Today, many of these homes are abandoned. One is the home that Ali shares with his father and several cousins.

Tweeter made the miracles then help me to draw the attention of the decision makers in order to save this heritage (Brazilian afro-Brazilian heritage) of Porto-Novo, of Benin, of Africa sees the world … Rt appreciates 🙏 pic.twitter.com / S5GUlvbDoa

Adjao Ali, using the handle @DiscovPortoNovo, published this tweet, warning that Porto-Novo risks losing its Afro-Brazilian heritage, as many of the buildings built in this style fall into disrepair. “Tweeting can work wonders so help me get the attention of the powers that be saving this cultural heritage (Afro-Brazilian buildings) in Porto-Novo, in Benin, in Africa, in the world … [retweet] appreciated.”

My great-grandfather built this villa in 1890. He was a nurse and was an important person in town. His name was Ali Tidjani, but everyone called him “Doto”, which means “doctor” in Goun, the language spoken here.

In the years following my grandfather’s death, his children and grandchildren gradually moved away and left the family home. But in 2015, my father decided to return and live here. Now about a dozen of us live in the home.

The home is large and impresses visitors. But the walls are cracked and crumble in places. The bamboo woodwork also looks ready to fall down. A few months ago, one of the walls in the home collapsed. We’re afraid the whole thing will collapse. The home is more than a century old and needs work.

There are a number of homes like this in my neighborhood. The government should help us save them because they are an integral part of the city’s charm and originality.

‘The Afro-Brazilians were the richest people in the city’

Porto-Novo’s history was marked by the slave trade and colonization. Millions of enslaved people were transported from Porto Novo and other cities in Benin such as Ouidah to America. After the abolition of the slave trade, some liberated people and their descendants living in Brazil decided to return to Benin. They brought with them the architectural style that the Portuguese favored in Brazil.

Afro Brazilian architecture is the confluence of Baroque style and local building techniques. The buildings are built of clay covered with cement. The walls are covered with lime-colored with ocher and adorned with carved wood carvings.

Richard Hounsou is the director of the cultural heritage of the city of Porto-Novo. He explains:

Many European slave traders also stopped on the shores of Benin after the abolition of slavery. Thus, the building styles of these people from Portugal or from other Iberian trading places in Europe also became part of our city’s architectural landscape.

The most striking example of this style is the Great Mosque of Porto-Novo, which is a replica of the Church of San Salvador de Bahia in Brazil. The only difference is that the cross was replaced by a star and a crescent.

Between the late 19th and early 20th centuries, Afro-Brazilians were the richest people in the city. They all had the best positions in government. But a century has passed since then and this cultural group no longer has the same wealth. The descendants who struggle to maintain the homes built by their ancestors.

In 2002, a list of 446 Brazilian Afro homes was established in Porto-Novo. About ten years later, more than a hundred of the homes on the list had disappeared [Editor’s note: These homes were either demolished or had collapsed.] Now we have really lost even more.

‘These buildings disappear for economic reasons’

Aimé Gonçalves is an architect specializing in the historical preservation of Cotonou. He believes that immediate action must be taken to save these important sites, which represent Porto-Novo’s unique identity:

Afro-Brazilian architecture prioritizes comfort. Clay used means that the home remains cool when it is hot and hot when it is cold. The blind windows provide privacy. Doors and ceilings are richly decorated.

These buildings disappear for economic reasons. There is a lot of real estate speculation going on in Porto-Novo right now, especially in the area around the market. There are many foreigners who come and buy these homes, destroy them and turn them into modern buildings.

It is important to act now to save the city’s unique identity and start restoring these cultural heritage sites. We are not moving fast enough. The restoration process is so slow that demolition and alterations surpass them. With the progressive disappearance of these buildings, we are losing an important part of our culture.

In 2008, the city government restored a house that was built in 1929 and now houses several municipal services. The restoration of three other homes belonging to various well-known families in Porto-Novo was also completed in 2020 thanks to a World Bank grant of 500,000,000 CFA francs (more than 760,000 euros) through an organization called Paraud, an urban planning project. One of these restored homes now has a museum of Afro-Brazilian heritage. A fourth home is currently being restored.

“Restoration is expensive. The city will never have enough money to restore all the hundreds of Afro-Brazilian homes in our area. We are currently working to restore a dozen of these homes. The idea is to set an example and raise awareness. among the owners of these homes, to encourage them to take care of these properties because they are invaluable, says Richard Hounsou.

There are also private restoration initiatives such as the one run by the Fondation Zinsou, which restored the Ajavon villa in Ouidah in 2013 and turned it into a modern art museum at an estimated cost of 150,000 euros. But Marie-Cécile Zinsou, president of the Foundation, said one of the most difficult parts was co-ownership.

The renovated Ajavon villa that demolishes the contemporary art museum of the Zinsou Foundation. © Dominique Burton

There is a desire to renovate these cultural heritage sites so that they can continue to live. The problem is that many of these homes are jointly owned by many people, which makes things extremely complicated as they often struggle to come to an agreement. It took us four or five years to find the Ajavon villa and buy it.

When Ali posted photos of his family home on Twitter, he said he received several messages from private individuals who offered to rent the villa, renovate it and turn it into an art and culture museum. His dream of seeing his Afro-Brazilian home restored can be realized if his relatives, joint owners of the property, can agree.