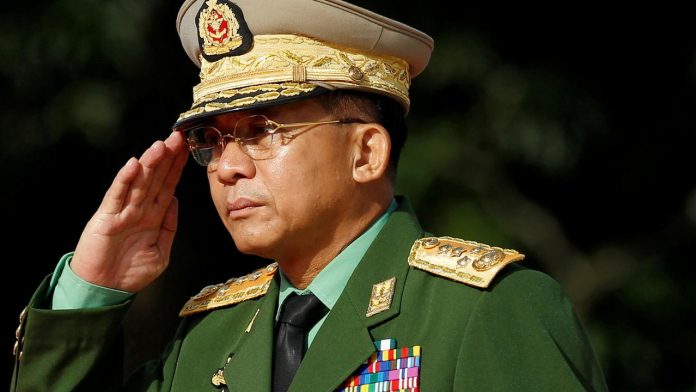 Min Aung Hlaing, commander of Myanmar’s armed forces, has emerged as the country’s new strongman after Monday’s coup. He has promised to hold elections after a year of state of emergency, but few believe him because the country’s military chief has shown reluctance to call it quits.

Myanmar’s military chief, General Min Aung Hlaing, should have quietly prepared to retire in July when he turns 65, the official retirement age for the commander of the country’s armed forces.

But instead of preparing to leave office and focus on preparing a successor, the general consolidated power in a military coup.

Referring to election fraud in November 2020 – in which Nobel laureate and de facto ruler Aung San Suu Kyi’s party won a landslide 83 percent of the vote – the junta introduced a state of emergency that will be followed by “free and fair majority elections”, according to a statement from Myanmar’s Chief of Staff.

But it is impossible to know if Min Aung Hlaing will keep his word. “The purpose of the army has always been to govern the country,” Nehginpao Kipgen, executive director of the Center for Southeast Asian Studies at the Jindal School of International Affairs in India, said in an interview with FRANCE 24.

Min Aung Hlaing has long intended to exercise power alone without the burden of a civilian prime minister, according to a New York Times 2017 survey. “His plan is to become president by 2020,” U Win Htein, an adviser to Suu Kyi, told USA daily.

However, the results of the parliamentary elections on 8 November dampen his ambitions. Suu Kyi’s party, the National League for Democracy (NLD), swept the ballot and reaffirmed its position as the country’s leading political power. The Military Support and Development Party (USDP), on the other hand, received only a fraction of the votes.

It was an election blow that Min Aung Hlaing could not accept. Political tensions had risen since the election results were announced, guessing fears of a military coup escalating over the weekend. The military “first questioned the results of massive fraud, and then the election election validation of the election, they said they had no choice but to seize power by force,” Kipgen said.

The coup puts Min Aung Hlaing, the embodiment of Myanmar’s military system, at the helm of a country that has been under military rule for almost half a century. Born in the southern city of Tavoy, now known as Dawei, Min Aung Hlaing studied in Rangoon, the country’s former capital, now Yangon. At the age of 18, he entered the country’s military academy after a two-year period in law.

It is difficult to get a clear idea of ​​the young recruit’s personality or to confirm different stories about his youth. Some childhood friends described him as quiet and reserved for Reuters, while others described him as a “bully who tended to humiliate his classmates,” according to testimonies collected by the New York Times. Hla Oo, a Burmese exiled writer in Australia who knew him as a child, remembers a hard-working, studious young man who “hardened himself in battle in the army.”

But he was not an obvious candidate for a future commander. “He climbed slowly but surely,” a former military academy chief told Reuters. Kipgen noted: “He was not someone who stood out in the Burmese army.”

His turn began to turn when he joined the Army’s 88th Light Infantry Division, which at that time was commanded by a certain colonel other than Shwe.

My Aung Hlaing made Than Shwe his mentor and continued his career in the shadow of the man who in 1992 rose to head of the country’s military junta.

Cultivate an image on social media

In 2011, Than Shwe made Min Aung Hlaing his successor and the first commander-in-chief of Myanmar’s post-military junta. His choice over other more experienced generals was probably due to “the fact that Than Shwe believed he would be in the best position to continue his vision for the army and the country,” Kipgen explained.

As Shwe’s heir and true to the vision of an almighty military, Min Aung Hlaing negotiated with Suu Kyi and charted the path to Myanmar’s democratic transition. But as military chief, he played both sides. On the one hand, he was “very careful in his contacts with the head of government and avoided open confrontation as much as possible,” Kipgen said.

But he also did everything to show that the army remains the real master of the political game. He went on several official trips, especially to China and Japan, and received foreign dignitaries, such as Pope Francis 2017. The trips and meetings were carefully recorded and shared on social media. “He’s very good at cultivating an image of statesmanship, paying attention to the smallest detail,” Min Zin, director of the Institute for Strategy and Policy – Myanmar, a think tank in Yangon, said in an interview with the New York Times.

But his public relations efforts failed to work outside Myanmar. For the international community, Min Aung Hlaing is seen above all as the man behind the persecution of the country’s Rohingya Muslim minority starting in 2016.

“Although he is not directly and personally involved, he militarily – as army chief – approved this campaign,” Kipgen noted.

While several countries have adopted the term “genocide” to describe the military’s transgressions against the Rohingya, Min Aung Hlaing openly defended the army’s actions on Facebook and Twitter. The military chief only uses the term “Bengali” to refer to Rohingya, which indicates that they are foreigners who have no business on Burmese soil. He also justified the actions of the army by repeatedly saying that “our regions must be controlled by the national races”.

He was banned from traveling to the United States and was also banned from Twitter and Facebook in 2019.

With Min Aung Hlaing’s rise to power, the hard-line faction of the military has put an end – for now – to Myanmar’s fragile democratic process. And for those who may have been looking forward to the military chief’s retirement, they will have to wait a little longer.