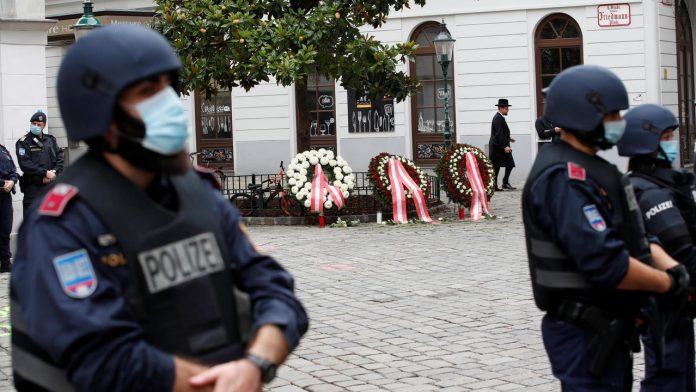 The Islamic State group on Tuesday claimed responsibility for an attack in Vienna that killed at least four people without providing evidence in a statement from the group’s Amaq News Agency, which was published on Telegram.

The group’s statement was accompanied by a picture of a bearded man named “Abu Dagnah Al-Albany” and said he attacked the crowds in central Vienna with a gun and a machine gun on Monday before being killed by Austrian police.

Sagittarius was released from prison less than a year ago.

An elderly man and woman, a young passerby and a waitress were killed and 22 people including a police officer were injured, Interior Minister Karl Nehammer told a news conference. The mayor of Vienna said three people were still in critical condition.

In a televised speech, Chancellor Sebastian Kurz told the Austrians: “This is not a conflict between Christians and Muslims or between Austrians and migrants. No, this is a struggle between the many people who believe in peace and the few [who oppose it]. It is a battle between civilization and barbarism. “

The attack followed shortly after deadly attacks by lone Islamist attackers in Nice and Paris, where some Muslims have become angry at the publication of satirical caricatures of the Prophet Mohammad.

In Paris, French President Emmanuel Macron went to the Austrian embassy to write a message of condolence in German, which reads: “In joy and sorrow we remain united.”