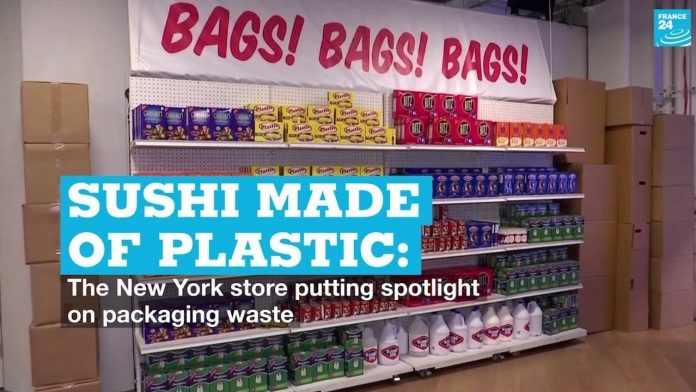 At first glance, it looks like a regular supermarket, but on closer inspection, only a few of the products are likely to tempt buyers, from breakfast products to bottle caps to sushi made from plastic bags.

“The plastic bag shop looks like an ordinary grocery store, and it is full of items that seem very familiar. But there are humorous and satirical takeovers of everyday products that highlight the amount of waste we use and the environmental problems associated with it,” says artist Robin. Frohardt, creator of The Plastic Bag Store, to Reuters.

The opening of the store has been timed to coincide with a new ban on plastic bags throughout New York State, where more than 23 billion plastic bags are currently used each year, according to local government figures.

But plastic bags are only part of the waste problem, with an estimated 1 million tons of plastic packaging ending up in the United States each year, according to data from the Environmental Protection Agency.

“There is an excessive amount of waste and disposable plastic that is used daily in New York City and around the world,” Frohardt said.

“And it’s designed for convenience, designed to be used for a very short period of time and then thrown away. But there’s nothing ‘gone’, and it does not go anywhere, it does not decompose, and it ends up in our oceans. and in the environment, and that’s a real problem. “