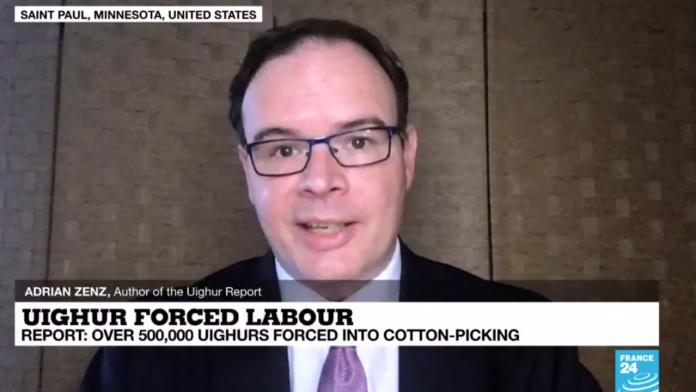 More than 570,000 Uighurs have been forced into forced labor in Chinese cotton fields, according to a report published on Monday. These revelations are a “game changer” and every person or company involved in these supply chains must “sell”, says Adrian Zenz, the researcher behind the report, to FRANCE 24.

The research, published December 14 by the Washington-based think tank Center for Global Policy, follows years of investigations by human rights activists showing that Xinjiang is home to a large network of camps where at least one million people have been imprisoned.

The report – which used Chinese regime documents available online – said the total number involved in three majority Uighur regions exceeds an estimate from 2018 of 517,000 people forced to pick cotton as part of the tens of thousands system.

“We have evidence from government documents that the state in 2018 transferred just over half a million Uighurs, and it is a system set up by [Xinjiang] Party Secretary Chen Quanguo, the same person who set up a police state and mass internment of people in camps, “Zenz, a senior member of China Studies at the Victims of Communism Memorial Foundation, told FRANCE 24.

>> The Muslim countries’ silence on China’s repression of Uighurs

“The problem is very deep because the Chinese state is trying to put the Uighurs to work; they must be busy and busy, Zenz continued. “Children are separated from their parents in boarding schools. parents get full-time work because if you work full-time in a factory or in a cotton field, you can not go to a mosque and you can not participate in traditional religious or community activities.

Evidence shows that government working groups – 70,000 civil servants each year – come down to the villages of Uighur; they ask in advance how many people are needed to pick cotton in the fields, says Zenz. “They go to every household and perform a short indoctrination. Accounts show that many older Uighurs are lined up to pick cotton because so many of the younger ones are in internment camps. ”

>> Break the silence about China’s “bilateral” campaign against Uighurs

The report puts pressure on major companies such as Nike, Gap and Adidas, which have been accused of using Uighur forced labor in their textile supply chains.

“This is a huge game changer,” Zenz said. “Everyone who cares or who claims to have something ethical in their business and supply chains must sell.”

Click on the player above to view FRANCE 24’s interview.