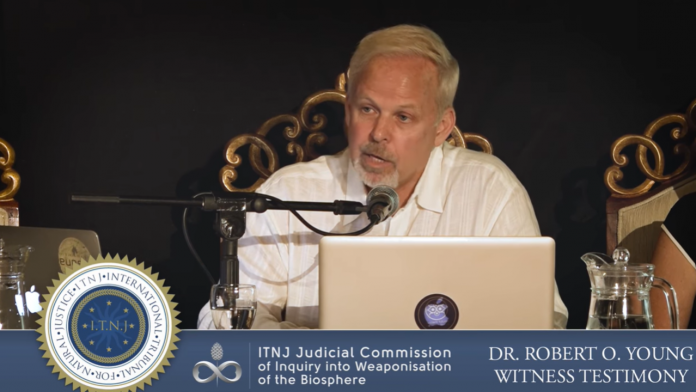 Does Bill Gates really want to eliminate 3 billion people, mostly Africans, in order to reduce the world’s population? That’s what controversial American homeopathic doctor Robert Young claimed in a video that recently appeared on social media. It turns out that Young and the organization that held the conference where he made his claims have a history of spreading unfounded conspiracy theories.

The video excerpt, which lasts about 30 seconds, circulated a lot on Twitter and shocked and upset many users. Someone shared it with our team via WhatsApp, where it also circulates a lot. The video shows Young at a conference hosted by the International Tribunal for Natural Justice (ITNJ), an organization that claims to function as some kind of court.

“Apparently Africans are deplorable and useless, but I can [be] sure that Africa’s resources are not ‘useless”, this user wrote on social media.

In this excerpt, Young claims that the founder of Microsoft said that 3 billion people must be eliminated from the earth, starting with Africans:

“For sterilization and population control, there are too many people on the planet that we need to get rid of. According to Bill Gates, 3 billion people must die. So we’re just starting in Africa. We start researching there and we will eliminate most Africans because they are regrettable, they are useless.

We searched on Google and found the International Tribunal for Natural Justice YouTube channel, where this excerpt was first published. The excerpt comes from a longer video – which lasts more than an hour and a half – which was published online on November 20, 2019.

The excerpt that circulated on Twitter comes from this video. It appears at 33’40 “.

Later in the conference (1 and 36 seconds) Young adds: “These are not my words, these are Bill Gates’ words. Just Google” Bill Gates and depopulation and sterilization “and you will hear the plan from his own mouth.”

Since the beginning of the Covid-19 pandemic, both Bill Gates and the foundation he created with his wife Melinda Gates have been the subject of various conspiracy theories. In the video above, Young probably refers to a statement from the American philanthropist during a Ted Talk 2010, but Young has completely distorted his words and taken them out of context.

Our team looked up what Bill Gates actually said during that conversation, which was about how to achieve carbon neutrality. He shows the audience an equation that shows how many people there are in the world and how much energy each person uses as well as other factors. He examines each factor one by one, beginning with the population.

“The world today has 6.8 billion people. That’s up to about 9 billion. If we do a really good job with new vaccines, health care, reproductive health care, we can reduce it by about 10 or 15%. But there we see an increase of about 1.3, says Gates and breaks down the formula.

To be clear – it is not the global population that the American billionaire wants to reduce by 10 to 15%, but population growth.

So who is Robert Young?

The video circulating online includes Robert Young, the controversial figure spreading this conspiracy theory about Gates, as well as a controversial organization, the International Tribunal for Natural Justice.

Young is a homeopathic physician in the United States. He advocates that only natural medicine should be used against serious diseases, such as cancer. In 2016, he was sentenced to prison for illegal medical practice.

The International Tribunal for Natural Justice is a UK-based organization that often shares conspiracy theories. Members claim, for example, that 5G contributes to the spread of Covid-19, which has never been proven.

Robert David Steele, one of the members of this so-called “tribunal”, claims that he is a former member of the CIA. In a 2017 interview, he claimed that the US space agency NASA kidnapped its children and enslaved them on Mars.