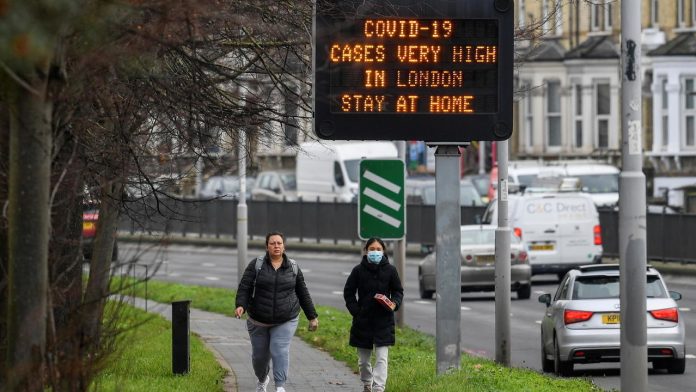 The UK registered a new daily high of more than 53,000 cases of Covid-19 on Tuesday, as concerns arose about increasing the number of positive tests and the pressure on health care.

Figures from the British government showed that 53,135 people had tested positive for the coronavirus in the last 24 hours, up from 41,385 the previous day, bringing the total number of cases to 2,382,865.

A further 414 deaths were registered within 28 days after a positive test, which increased the country’s toll to 71,567.

More than 24 million people, or 43 per cent of England alone, are already living under strict home measures, with bars, restaurants, pubs and other entertainment closed.

Health Secretary Matt Hancock will update Parliament on Wednesday on whether to tighten the screw further, as hospitals enter their busiest period during the winter months.

Samantha Batt-Rawden, a critical care physician who is also chair of the Doctors Association UK, said medical staff were at a “breaking point” with a lack of oxygen and equipment.

“We are extremely thin on the ground. NHS (National Health Service) staff have not been given priority for the vaccine and are getting sick a lot with the new strain,” she said.

“(Hospital) trusts are so desperate that they are tweeting for medical students to help out at the ICU,” she tweeted, urging the public to follow instructions to stop the spread of close contact.

Health officials said there were now more patients in hospitals in England than during the first peak of the outbreak in April, with a new strain being blamed for the increase.

NHS England figures showed that there were 20,426 Covid patients in the country’s hospital on Monday, more than the previous highest of 18,974 peak on April 12 during the first wave.

Testing is now much more extensive, which can account for the high numbers. But the true picture is likely to get worse, as not all four countries in the UK reported over Christmas.

“Many of us have lost family, friends, colleagues and – at a time of year when we would normally celebrate – many people understandably feel anxious, frustrated and tired,” said NHS England CEO Simon Stevens.

“And now again we are back in the eye of the storm with a second wave of coronavirus sweeping across Europe and, in fact, this country.”

Prime Minister Boris Johnson, who survived Covid after spending several days in intensive care, has been under pressure for his response to the outbreak.

The UK is pinning its hopes on its mass vaccination program, and Oxford / AstraZeneca jab is expected to be approved soon, according to reports.

More than 600,000 people had received a first dose of the Pfizer-BioNTech vaccine from December 8-20, the Ministry of Health said on Christmas Eve.

“We believe that by the end of the spring with vaccine supply continuing to come into operation, we will have been able to offer all vulnerable people across the country Covid vaccination,” says Stevens.

“It gives perhaps the greatest hope for the coming year.”

Health Trust has been commissioned to start planning for the use of Nightingale Field Hospital, the temporary facilities created during the first wave that have largely become unused.

London and south-east England are currently experiencing the onset of the outbreak, with paramedics in the capital saying they receive up to 8,000 emergency calls each day.

London’s ambulance service said Boxing Day – December 26 – was one of its “busiest days ever”.

The rise of the outbreak has affected Premier League football giants Manchester City, which has led to their game with Everton being postponed on Monday night.