Home World The UK vaccinates 140 people per minute but does not deliver as...
Facebook
Twitter
WhatsApp
Linkedin
LINE 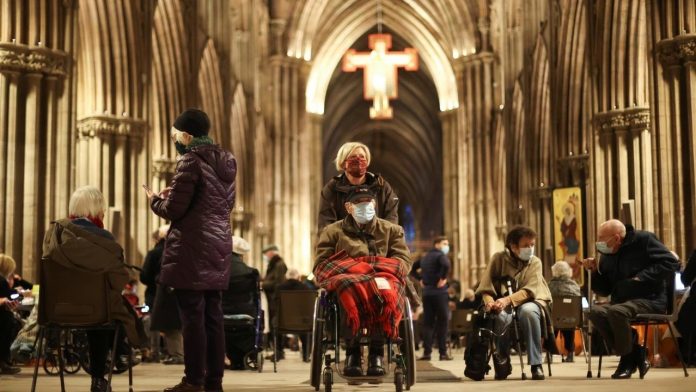 Britain’s vaccine rollout is limited by a “clumsy” manufacturing process with production changes by Pfizer and a delay in AstraZeneca that could lead to short-term supply disruptions, Vaccine Distribution Minister Nadhim Zahawi said on Monday.

Britain, which has the world’s fifth worst official death toll in Covid-19, is vying to be among the first major countries to vaccinate its population – seen as the best way to leave the pandemic and get the economy back on track.

The UK has vaccinated 3,857,266 people with a first dose and 449,736 with a second dose. For vaccines administered per 100 people, the UK is fourth in the world after Israel, the United Arab Emirates and Bahrain.

Zahawi told LBC Radio that the UK was hoping for 2 million vaccines a week from AstraZeneca but that these figures would not be reached until mid-February. Still, he said Britain was on track to reach its launch targets.

“It’s been a little clumsy,” Zahawi said of the vaccine.

Pfizer will temporarily reduce its deliveries to Europe of its Covid-19 vaccine while upgrading its production capacity.

“There will certainly be delays. Every new manufacturing process has challenges in the beginning, it is clumsy, it is starting to stabilize and get better and better week in, week out,” Zahawi told the BBC.

“The Pfizer BioNTech vaccine is a messenger RNA chemical, a difficult chemical to make, very, very challenging, but they do it really well, they want to do more, so they are reconfiguring to give volume to the whole world,” says Zahawi.

“It may delay delivery but I am convinced we can reach our goal.”

Mass Covid-19 vaccines are seen as the best way to leave the pandemic, which has killed more than 2 million people, wiped out billions of dollars in economic production and raised the normal lives of people worldwide.

The UK vaccinates an average of 140 people per minute against Covid-19.

“It’s going well, we vaccinate an average of 140 people, it’s the first jab, literally a minute. It’s the average so some areas do better,” Zahawi told Sky.

The UK is currently rolling out the vaccine to the most vulnerable first, starting with those in nursing homes or over the age of 80. In areas where a majority in the 80s have been offered a vaccine, letters go out to the 70s and those who are clinically extremely vulnerable.

Zahawi said a 24-hour vaccine offer would begin testing in London by the end of the month.

Significant workers such as teachers, police and shop assistants can go to the top of the list for a vaccine when everyone over 50 has been shot, says Zahawi.

“Teachers, police, store workers, those who without their own fault than the work they do can come in contact with the virus in a much larger volume, should be at the top of the list,” Zahawi told Times Radio.