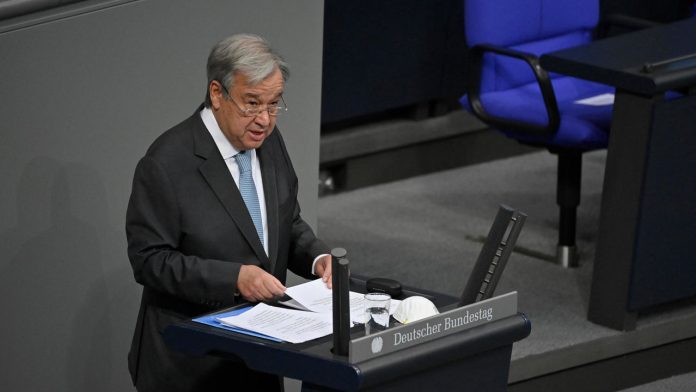 On Wednesday, at the request of a coordinated global attempt to vaccinate against Covid-19, the UN warned that inequalities in the initial efforts risk the entire planet.

The foreign ministers met practically for a first UN Security Council session on vaccinations called by the current president Britain, which said the world had a “moral obligation” to act together against the pandemic that has killed more than 2.4 million people.

UN Secretary-General Antonio Guterres has warned that only 10 nations have administered 75 percent of the doses so far – and 130 countries have not had any at all.

“The world immediately needs a global vaccination plan to bring all of them together with the necessary power, scientific expertise and production and economic capacity,” Guterres said.

He said the group of 20 major economies was in the best position to set up a working group on financing and implementing global vaccinations and offered full UN support.

“If the virus is allowed to spread like wildfire in the global south, it will be transformed over and over again. New variants could become more transmissible, more deadly and potentially threaten the effectiveness of current vaccines and diagnostics,” Guterres said.

“This could significantly prolong the pandemic, allowing the virus to return to plague the global Nordic region.”

The progress of # COVID19 vaccinations has been very uneven and unfair.

The world immediately needs a global vaccination plan to bring all of them together with the necessary power, expertise and production capacity.

I am ready to mobilize the entire @UN system in support of this effort. pic.twitter.com/YSp8JIBIx2

Henrietta Fore, head of the UNICEF’s children’s agency, said: “The only way out of this pandemic for any of us is to ensure that vaccinations are available to all of us.”

While the UN has sounded the alarm over the lack of access to vaccines in the global south, the EU has come under intense criticism over the bloc’s handling of the vaccine procurement process.

Amid signs that more infectious coronavirus variants are spreading uncontrollably across Europe, governments and EU leaders on Wednesday fought to speed up vaccine efforts that have been hampered by limited deliveries and to fund ways to hunt and counter variants.

The EU announced on Wednesday that it has agreed to buy another 300 million doses of Modern Covid-19 vaccine and injected almost a quarter of a billion euros (almost 300 million dollars) in efforts to fight virus variants.

The news came just hours after Pfizer and BioNTech said they had signed an agreement to supply another 200 million vaccine doses to the block.

The European Commission said that the second agreement with Moderna provides for an additional purchase of 150 million doses in 2021 and an opportunity to buy 150 million more doses in 2022.

“With a portfolio of up to 2.6 billion doses, we will be able to provide vaccines not only to our citizens, but also to our neighbors and partners,” said EU Commissioner Ursula von der Leyen.

While the 27-nation bloc began vaccinating its 450 million citizens almost two months ago, it is still far behind Britain, the United States and others in the proportion of the population reached.

Meanwhile, leaders in many developing countries have warned of the dangers of uneven access to vaccines.

Mexican Foreign Minister Marcelo Ebrard condemned the “injustice” in what he called a “deepening gap” when rich countries “monopolize vaccines”.

There is already a plan to help developing countries – Covax is an initiative funded by donors and governments aimed at providing two billion vaccine doses by 2021 with options for another billion.

Covax will soon be able to start delivering vaccines after the World Health Organization (WHO) approved the shot developed by AstraZeneca, on which the initiative is almost entirely dependent on its first wave.

However, aid groups say many people are still at risk of being left out due to a lack of Covax funding to organize the administration and sensitive transport of vaccines, as well as conflicts that make it difficult to inoculate.

Britain, one of the largest contributors to Covax with a commitment of 548 million pounds (760 million dollars), demanded temporary ceasefires to allow vaccinations of more than 160 million people they feared were at risk in conflict zones.

“We have a moral obligation to act and a strategic necessity to come together to defeat this virus,” said Foreign Minister Dominic Raab.

In his first Security Council appearance, US Secretary of State Antony Blinken promised that President Joe Biden’s administration would take a new leadership role after reversing Donald Trump’s decision to withdraw from the World Health Organization.

Blinken said that the United States would pay off its more than $ 200 million in obligations to the UN agency at the end of the month and make a “significant” contribution to Covax.

“The United States will work as a partner to address global challenges,” Blinken said.

But Blinken promised to push for improvements by the WHO, which Trump, under fire for his own handling of the pandemic, accused of being seen in China and not stopping the deadly virus.

“All countries must provide all data from the earliest days of each outbreak,” Blinken said, in a proposed renewal of US criticism that China has not cooperated with a WHO investigation into how the virus first emerged in 2019 in Wuhan.

Chinese Foreign Minister Wang Yi warned in his comments against “attempts to politicize the pandemic” and renewed Beijing’s offer of 10 million doses of its home-grown vaccine to Covax.

“We should come together to reject vaccinationalism,” he said.

The Security Council’s only direct involvement in the pandemic came in July when, following tensions between the United States and China, it adopted a resolution encouraging a ceasefire to limit the spread of Covid-19.

An immediate question for the UN is whether its own peacekeepers should have priority in vaccination.

India, a leading exporter of vaccines, announced a donation of 200,000 doses to UN peacekeepers.