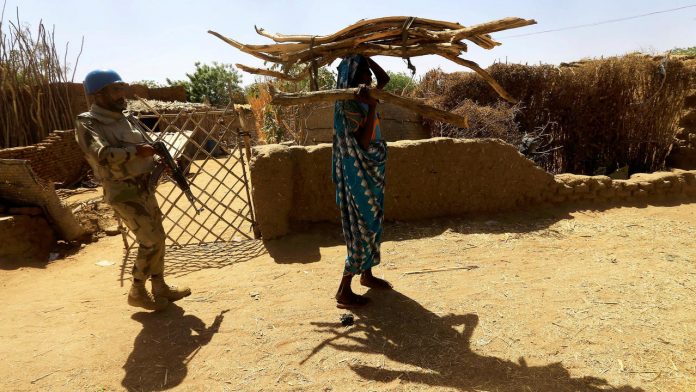 The UN and the African Union on Thursday ended a 13-year mission to keep peace in the vast Sudanese region of Darfur, although recent violent clashes make residents fear renewed fighting.

Fighting broke out in Darfur in 2003, when ethnic minority rebels rose up against the Arab-dominated government in Khartoum, which responded by recruiting and arming a notorious Arab-dominated militia known as the Janjaweed.

“From 1 January 2021, UNAMID’s troops and police personnel will focus on providing security for the mission’s downsizing activities, personnel and assets.”

He said the gradual withdrawal of the mission’s approximately 8,000 armed and civilian personnel would be completed within six months.

The Sudanese government “will take over responsibility for the protection of civilians in the area,” UNAMID said.

Darfur’s bitter conflict has largely subsided in recent years, and longtime autocrat Omar al-Bashir – wanted by the International Criminal Court for genocide and other alleged crimes in the western region – was ousted last year.

But the country’s transitional government is fragile, with ethnic and tribal conflicts still flaring up on a regular basis, including clashes last week that left at least 15 people dead and dozens injured.

Darfuris, many of whom remain in camps for several years after fleeing their homes, have been protesting in recent weeks against the imminent departure of the mission.

“Darfuri’s life is at stake, and the UN should reconsider its decision,” Mohamed Abdelrahman told AFP on Wednesday at the Kalma camp in Nyala, the capital of South Darfur.

He is among hundreds who arranged a seat outside the mission’s headquarters in the camp.

Longtime Kalma resident Othman Abulkassem fears that the departure of the troops signals “major problems” for Darfuris, which puts them at risk of further violence.

“We understand the concerns of the Darfuri population, especially internally displaced persons and other vulnerable groups, but the situation has greatly improved in recent years,” Eissa told AFP.

“The responsibility now lies with the Transitional Government and the Sudanese people themselves to improve peace and security in Darfur.”

A UN policy mission – the United Nations Integrated Transitional Mission in Sudan (UNITAMS) – will be installed in Darfur following the departure of UNAMID.

It will be responsible for assisting Sudan’s transition, peacebuilding and disbursement of aid.

“It is true that its term of office was weakened by some obstacles, but it was good overall,” the minister told a news conference in Khartoum, adding that the deployment of government forces across the region would be completed in March.

But many are skeptical.

“If the protection of internally displaced persons is granted to government forces, it will be like handing over Darfuris to the forces that committed massacres and rapes against them,” said 25-year-old Darfuri Intisar Abdelhay.

Thousands of Janjaweed troops were incorporated into Sudan’s powerful paramilitary Rapid Support Forces, whose leader Mohamed Hamdan Daglo is a key figure in the transitional government.

Janjaweed is accused by human rights groups of carrying out extensive killings and rapes as part of a broader campaign of “ethnic cleasing” during the early years of the conflict.

Bashir was ousted by the army in April last year after widespread mass protests against his iron-fisted regime.

In August 2019, the military rulers who fired him agreed on an uncertain power-sharing transition with civilians.

The transitional government has pushed for peace with rebel groups in all three of Sudan’s main conflict zones, including Darfur.

But two rebel groups refused to join the deal, including the Sudan Liberation Movement (SLM) faction led by Abdelwahid Nour, which is believed to maintain significant support in Darfur.

Clashes are still raging in the region over land and access to water, mainly to pit nomadic Arab pastoralists against resident peasants from non-Arab ethnic groups.

“There is not yet full and comprehensive peace in Sudan,” said Kalma resident Mohamed Hassan.

“And until there is, we are towards the end of the UNAMID mission.”