Home World The United States is carrying out the 13th and final execution under...
Facebook
Twitter
WhatsApp
Linkedin
LINE 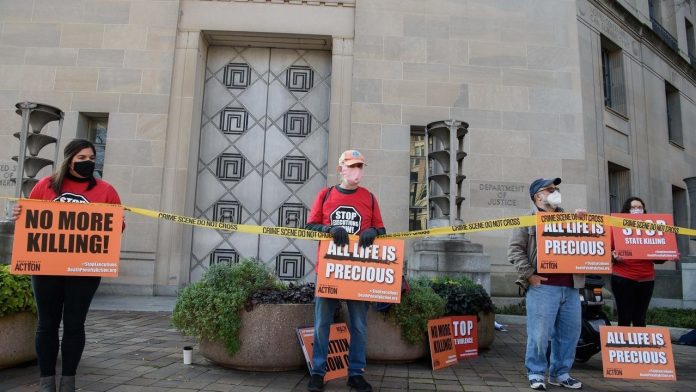 The US government carried out the 13th and final federal execution under President Donald Trump’s administration on Saturday morning, just four days before President-elect Joe Biden takes office with a promise to try to end the death penalty.

Five hours after Dustin Higgs, 48, was to be executed, the Conservative majority in the US Supreme Court cleared the way for lethal injections to continue by overturning a stay decided by a federal appeals court.

Higgs was sentenced and sentenced to death in 2001 for overseeing the abduction and murder of three women at a federal nature reserve in Maryland in 1996: Tanji Jackson, Tamika Black and Mishann Chinn.

The US Department of Justice planned to execute him with lethal injections of pentobarbital, a powerful barbiturate, at its death chamber in its prison in Terre Haute, Indiana.

The Supreme Court’s ruling on Friday was in line with its previous decision: it had also rejected all lower court decisions that delayed federal executions since they resumed last year.

Last year, the federal government executed ten people last year, more than three times as many as in the past six decades, marking for the first time that it carried out more executions than all U.S. states combined, according to a database compiled by the Death Penalty Information Center. A minority of the country’s 50 states are still carrying out executions.

#DustinHiggs has been executed by the Bureau of Prisons. He was pronounced dead at 1:23. It was the 13th federal execution carried out since July and the most in any presidency in more than 120 years. https://t.co/kTgIYNkJ0U

The end of Trump’s extraordinary storm

Higgs is the 13th person to be executed by the US government in an extraordinary war launched last summer by Trump, a Republican and promised advocate of the death penalty, after a 17-year break at the federal level. Before Trump, the federal government had executed only three people since 1963.

After a failed triple date with the three women, Higgs and his accomplice, Willis Haynes, offered to drive them home but instead took them to the Patuxent Research Refuge. Prosecutors said Higgs gave Haynes a gun and asked him to shoot the three women. Haynes, who admitted he was the shooter, was sentenced to life in prison, while Higgs was sentenced to death in a separate trial, a difference that his lawyers say is a reason for goodness.

The Supreme Court approved the Justice Department’s request to overturn a lower court decision delaying enforcement while a legal issue is resolved: federal law requires an execution to be carried out in the same manner as the state where the convict was convicted, Maryland has since abolished the death penalty.

The Department of Justice had unsuccessfully sought a new verdict for a federal judge in Maryland to allow them to execute Higgs according to the procedures used in Indiana, a state that still allows lethal injections and is home to the department’s execution chamber.

The Fourth District Court scheduled a hearing in the case on Jan. 27, almost two weeks after Higgs’ planned execution, which the Justice Department said left it unchecked unless the Supreme Court overturned the delay.

Higgs and another death row inmate, Corey Johnson, were diagnosed with COVID-19 in December, but on Wednesday the Supreme Court rejected a decision by a federal judge in Washington that delayed their executions for several weeks to allow the lungs to heal. The Justice Department executed Johnson on Thursday night.

After the American Civil Liberties Union (ACLU) sued other inmates at the prison complex, a federal judge in Indiana ruled that the executions of Johnson and Higgs could only continue if the U.S. Bureau of Prisons carried out several measures to stop the spread of COVID-19.

One measure ordered by Judge Jane Magnus-Stinson was that officials in prisons and executions follow “mask requirements,” but media witnesses and Johnson’s spiritual adviser, Pastor Bill Breeden, who was on Johnson’s side, said at least one of two U.S. officials in the room had none. mask on in many minutes.

The ACLU successfully asked the judge to find the prison bureau in contempt of court and order that Higgs’ execution be stopped. Asked why it should not be found in contempt, the prison office responded on Thursday night, saying that “mask requirements” were not clearly defined and that it was necessary for officials to remove or not wear their mask for “clear communication.”

Alexa Cave, Higg’s sister, traveled to Terre Haute with her adult son to witness the execution continue and said she asked for something to delay it. Life in prison would be a fairer punishment, she said, adding that she talks to him by phone several times a week.

“They have no freedom at all in any sense of the word,” she said in an interview. “What purpose does it serve to kill you? It gives nothing back.”