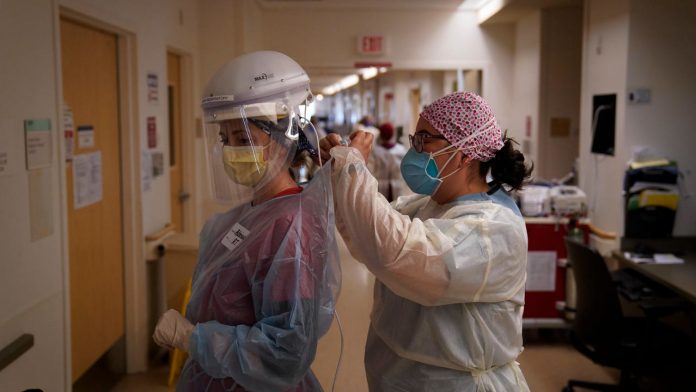 The United States marked the new year on Friday by meeting the extraordinary milestone of 20 million cases of Covid-19, after global celebrations welcomed in 2021 were largely dampened by the pandemic.

The United States has floundered in its efforts to curb the virus, which is spreading rapidly across the country and has already caused more than 347,000 deaths – by far the highest national number of deaths.

Worldwide hopes that Covid-19 vaccines will end the pandemic in 2021 quickly have been shaken by the slow start of the US vaccination program, which has been hit by logistical problems and congested hospitals.

Nearly 2.8 million people in the United States have already received their first jabs, but the figure fell far behind the 20 million vaccinations promised by President Donald Trump’s government at the end of 2020.

The desperate race to vaccinate will dominate the coming year, with the coronavirus already killing at least 1.8 million people since emerging in China in December 2019, according to a report by official sources compiled by AFP.

The German company BioNTech said on Friday that it was competing to increase production of its Covid-19 jab to fill a gap left by the lack of other approved vaccines in Europe.

Countries including the UK, Canada and the US previously approved the Pfizer-BioNTech vaccine and have since also had green light stops from the US company Moderna or Oxford-AstraZeneca.

“The current situation is not rosy, there is a hole because there are no other approved vaccines and we have to fill this gap,” BioNTech founder Ugur Sahin told Der Spiegel every week.

Waiting for the vaccine

Criticism of the slow pace of vaccine development has intensified in recent days.

In Germany, chief physicians have complained that hospital staff are waiting for vaccines despite being in a priority group.

France has seen similar complaints and urged the government to announce that health workers over the age of 50 can get the shot from Monday – earlier than planned.

The French government also announced on Friday that a nationwide curfew would be extended in 15 regions where infections are high. The curfew starts at 18.00 rather than 20.00, including in the Mediterranean city of Nice.

“The virus continues to spread … but with differences between regions,” a French government spokesman said, confirming that theaters, cinemas and concert halls could not be reopened on January 7, the latest earliest date.

Also in France, about 2,500 partygoers took part in an illegal New Year’s rave near Rennes and collided with the police who tried to stop it, the authorities said.

But around the world, normally extravagant midnight celebrations in cities such as Sydney, New York, Rio de Janeiro and Edinburgh were reduced or interrupted and crowds were banned from participating.

Rio saw an upturn: 89 percent less garbage on Copacabana Beach, which is left clogged with rubbish every year after its New Year’s party.

“We were ready for all scenarios. But congratulations to the people of Rio, who listened to the authorities’ calls to avoid large crowds and stay at home,” said the municipality’s sanitation director Flavio Lopes.

Passengers who lose trains between London and Paris on the first day after Britain’s withdrawal from the EU customs union were given additional checks but seemed more worried about the extra rules required for travel due to Covid-19.

“I would not be home during the holidays but there was an emergency. I bought my ticket at the last minute, with a test (for Covid-19) that cost 200 pounds (225 euros, 270 US $)”, says Stephanie Bapes, a 35-year-old French woman living in London.

Britain said on Thursday that it had vaccinated almost 950,000 people, as a sharp increase in coronavirus cases led to the resumption of field hospitals.

Norway, which has one of the lowest infection rates in Europe, on Saturday will start requiring Covid-19 tests on arrival in the country.

Travelers from abroad must be quarantined for seven days and tested negative twice as part of the new restrictions, which were introduced after Norway registered five cases of the new coronavirus variant that first appeared in the UK.

Experts believe that the worst has not yet come globally and predict a sharp increase in cases and deaths after weeks of vacation.

According to Johns Hopkins University, the United States hit a record number of daily deaths on Wednesday when more than 3,900 people died from Covid-19.

Under Trump, US authorities have often issued mixed messages about worm-carrying, social distancing and suspension, and the outgoing president has repeatedly downplayed the risks.

But in his New Year’s announcement, Trump praised his government’s response, saying, “Our most vulnerable citizens are already getting the vaccine, and millions of doses are being sent rapidly across our country.”

On Thursday, the World Health Organization granted the emergency validation of the Pfizer-BioNTech vaccine and paved the way for countries around the world to quickly approve import and distribution.