Home World The US Supreme Court reinstates the barrier to the supply of abortion...
Facebook
Twitter
WhatsApp
Linkedin
LINE 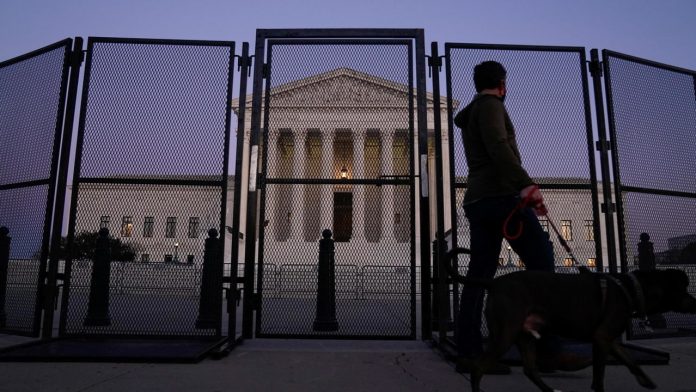 The U.S. Supreme Court on Tuesday reinstated a requirement for women to visit a hospital or clinic to obtain a drug used for drug-induced abortion, and overturn a lower court ruling that allows the drug to be shipped or delivered as a precautionary measure during the coronavirus pandemic . .

The judges granted a request from President Donald Trump’s administration to overturn a federal judge’s decision in July that had repealed the US Food and Drug Administration’s (FDA) rule that required personal visits during the pandemic.

The pandemic is still raging nationwide. Coronavirus infections are still at a record high in many US states. Nearly 130,000 Americans were hospitalized with COVID-19 at midnight on Monday and the country had reported 22.5 million infections and 376,188 deaths.

The court’s three liberal judges said they would have denied the Trump administration’s request while the dispute continues in lower courts.

U.S. District Judge Theodore Chuang in Greenbelt, Maryland in July found that because of the health risks posed by COVID-19, personal demands “pose a major obstacle to women seeking drug abortions” and are likely to violate their constitutional rights.

Mr Chuang’s injunction said the government had taken steps to effectively waive several personal requirements for the distribution of other drugs, including opioids.

Justice Sonia Sotomayor addressed that difference in a disagreement on Tuesday. “This country’s laws have long designated abortions for more onerous treatment than other medical procedures,” she wrote, adding that the FDA rule imposes an “unjustifiable, irrational and unnecessary burden on women seeking abortion during the current pandemic.”

In a brief statement in line with the decision, Chief Justice John Roberts said the dispute was not generally about the right to abortion but rather the courts’ reference to government decisions related to the pandemic.

The dispute concerns the FDA’s requirement that the drug mifepristone, one of two pills used to perform drug abortions, be issued in person by a certified prescriber. Drug abortions are approved during the first ten weeks of pregnancy.

Groups representing tens of thousands of doctors, including the American College of Obstetricians and Gynecologists, sued the FDA in May, saying that requiring personal visits to pick up a pill unnecessarily puts patients, doctors and workers at greater risk of getting COVID-19 .

The groups said that this is especially true given that evaluations and advice can be done through telemedicine and that the drug itself can be taken elsewhere.