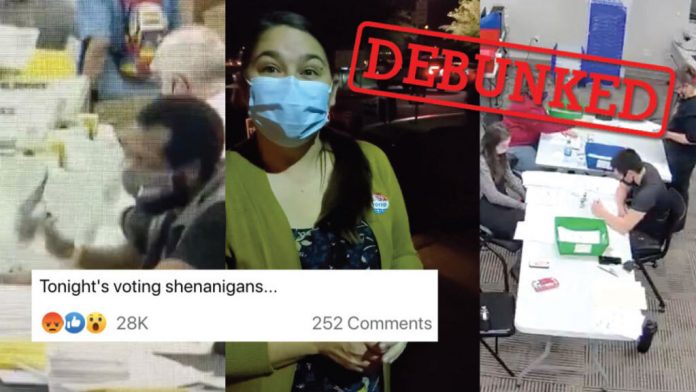 When President Trump casts doubt on the outcome of the 2020 US presidential election and raises allegations of fraud in many states, many social media users have reiterated these concerns and posted videos that they claim expose election worker fraud under hashtags like #StopTheSteal. Here are three of the most viral videos claiming to be fraudulent in the polls, and our explanations for why these allegations are false.

A video shared widely on Facebook and Twitter over the past week falsely claims that Arizona state voting workers invalidated President Trump’s polls by forcing voters to use Sharpie pens, thereby rendering those votes countless.

The original video, posted on Facebook by a Trump supporter on November 4, shows a conversation between a man (the person filming the video) and a woman in front of a polling booth in Maricopa County, Arizona. The video begins with the woman explaining that the votes of the people in front of her were not read by the voting machine because they used Sharpies, while her vote was read when she used a pen. The man then claims that “they force people to use a Sharpie”, and these votes do not count. He concludes by saying that “people come here to vote for Donald Trump, and these votes will all be invalid.” The video has received 28,000 reactions and 252 comments on Facebook.

However, Arizona government officials and the Maricopa constituency have confirmed that the Sharpies will not invalidate ballots and that bleeding ink will not prevent a vote from being counted.

In a tweet on October 26 (before election day), the Maricopa constituency wrote that voters can use “black or blue ballpoint pen and even Sharpie to mark [their] poll “and that” ink bleed will not affect the bill “due to upgraded polls and new voting tables. An accompanying video also explains that” Sharpies with fine tips are used because it is the fastest drying ink and works best on the table equipment “.

NOTICE YOUR PIPE: Did you know that you can use a black or blue ballpoint pen and even sharp to mark your vote? Even if it bleeds through, it does not affect the count because our upgraded polls have columns that are centered and our new tabs only read the ovals. Read more: pic.twitter.com/MugtkodBPn

On November 4, Arizona Secretary of State Katie Hobbs tweeted that “if you voted a regular ballot in person, your vote will count, no matter what type of pen you used (even a Sharpie)!” On November 5, the Michigan Department of State also posted a fact check on Twitter confirming that the Sharpies will not invalidate polls and Bleeding will not change or suspend the poll.

Fact check: The use of a Sharpie to mark a ballot will not invalidate or cancel a ballot or ballot. If the cursor bleeds through to the other side, the ballots are designed so that the bleed does not touch or come close to a voting area on the other side of the ballot. 1/2

An election worker in Georgia did not cast a ballot

Another Twitter video posted by Trump supporters and YouTuber Essential Fleccas on November 5 shows a video recording of an election worker sorting votes alone at a desk. The worker seems upset and is then seen crumpling up a piece of paper and tossing it aside. The man who tells about the recording claims that the worker “cast a ballot and wrinkled it up”. The video has been viewed five million times on Twitter and has also been published on Instagram.

After determining that the video showed an election worker in Fulton County, Georgia dealing with absent votes, county election officials reviewed the video and found its allegations to be false.

Richard Barron, chief executive of Fulton County, confirmed at a news conference on November 6 that the worker simply threw out a list of instructions in a ballot envelope, The New York Times reported. Barron noted that the ballot boxes are much longer (8.5 x 19 inches to be exact) than the paper discarded by the worker. An investigation into the incident carried out by the state election board also showed that no voting rights had been thrown away. In a statement from Fulton County, the worker said he was upset because his fingers were slightly injured due to machine failure.

According to Barron, the worker has been hiding because his personal information was leaked online and threats were made in his life.

An election worker in Pennsylvania did not vote illegally

A Twitter video published by conservative science fiction writer Jon Del Arroz on November 6 shows a recording from Delaware County, Pennsylvania of an election worker filling out several ballot papers while sitting near his colleagues. In the comments, many users claimed that the worker fraudulently decided or changed votes. The video was viewed 1.1 million times on the platform.

A press release issued Nov. 6 by Delaware County confirmed that the worker did not fraudulently fill in polls but transcribed polls that were damaged by machine-drawn pure elections. The county also confirmed that when the ballot papers were transcribed, “the original damaged ballot papers were placed directly next to the new ballot papers and two-party observers witnessed the process up close”. The observers do not appear as “the circulated video [taken from Delaware County’s official live-stream] zoomed in to crop the surrounding area, including the two-party observers that were no more than six meters away ”.