Home World They are expected in a French trial over the Charlie Hebdo attack...
Facebook
Twitter
WhatsApp
Linkedin
LINE 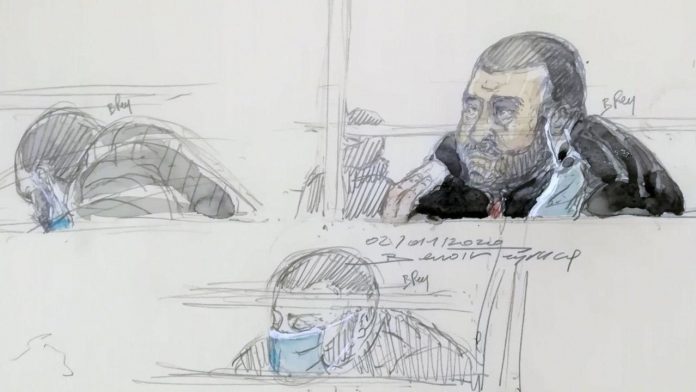 Judges will announce their verdict on Wednesday on the 14th suspected accomplice of the Islamist armed men who murdered some of France’s most famous cartoonists at the weekly Charlie Hebo 2015, murders that terrified the nation.

Seventeen people were killed during three days of attacks in January 2015, beginning with the massacre of 12 people at the satirical newspaper, which had published cartoons of the Prophet Mohammed.

The attack was followed by the killing of a French policewoman and the hostage-taking at the Hyper Cacher market.

The killings, which signaled the beginning of a wave of Islamist attacks around Europe, triggered a global outburst of solidarity with France under the slogan “I am Charlie”.

All three attackers were killed in shootings with police after the attacks.

Those facing trial are accused of helping the Kouachi brothers, who carried out the Charlie Hebdo massacre, and their accomplice, hostage-taker Amedy Coulibaly.

Over three months, the trial was repeatedly held due to the Covid-19 pandemic.

It has once again highlighted the horrors of the attacks, during a period when France has once again faced assassinations accused of Islamist radicals.

Prosecutors against terrorism are seeking prison sentences ranging from five years to life imprisonment for the accused.

Defense lawyers have accused the prosecutor’s case so thinly of evidence and warned to make examples of the accused with “crazy” punishments to compensate for the fact that the killers themselves cannot be tried.

Prosecutors are seeking life sentences for Ali Riza Polat, a 35-year-old French-Turkish friend of Coulibalys, whom they presented as his “right hand man”.

Polat admitted before the court that he had been involved in crime, including drug trafficking, but denied any knowledge of a terrorist plot.

“I really did not do all the things you say I did,” he said.

Coulibaly’s girlfriend Hayat Boumeddiene, who fled to Syria shortly after the attacks and was one of three convicted in absentia, is also facing life in prison.

DNA of one of the suspects, Nezar Mickael Pastor Alwatik, was found on a gun and a revolver used by Coulibaly when he took shoppers hostage in the Hyper Cacher supermarket.

Pastor Alwatik is accused of being part of a terrorist conspiracy – accusations that his lawyer, Delphine Malapert, considers excessive.

“You can not convict anyone because of vagueness, suspicion and speculation,” she told the court, arguing that all he was guilty of was “touching weapons.”

The three-month trial revived memories of attacks that created a pattern for radicalized French Muslim youths who were inspired or led by jihadist groups to attack their homeland.

The Kouachi brothers claimed that they were acting on behalf of Al-Qaeda while Coulibaly had sworn allegiance to the Islamic State.

During the trial, survivors of the attacks recounted scenes of terror.

Columnist Sigolene Vinson, who survived the Charlie Hebdo massacre, described the “deadly silence” in the office as her colleagues lay dead around her.

Former Hyper Cacher treasurer Zarie Sibony described walking over bodies in the aisles of the supermarket during Coulibalys’ four-hour shutdown with police.

The Charlie Hebdo massacre sparked intense debate about freedom of expression and the place of Islam in secular France.

To mark the beginning of the trial on September 2, Charlie Hebdo defiantly published the cartoons of the Prophet who had angered Muslims.

Three weeks later, a Pakistani man injured two people outside the newspaper’s former office and hacked at them with a cleft.

On October 16, a young Chechen refugee beheaded teacher Samuel Paty, who had shown some of the caricatures to his students.

And on October 29, three people were killed when a young Tunisian recently arrived in Europe stabbed in a church in the Mediterranean city of Nice.

President Emmanuel Macron’s government has introduced legislation to tackle radical Islamist activity in France, a bill that has angered some Muslim countries.