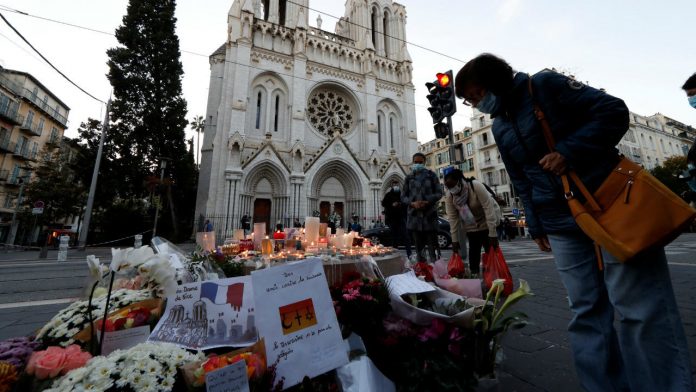 A third man has been detained for questioning in connection with the knife attack on a church in the southern French city of Nice, which left three people dead, a legal source said on Saturday.

The man, 33, was present during a police search late Friday at the home of another man, who was also detained for questioning when he was believed to have been in contact with the attacker, the source said.

“We are trying to clarify what his role is in all of this,” the source added.

The suspect in Nice, who was shot and hospitalized in critical condition, has been identified, according to French investigators, as a 21-year-old Tunisian man who arrived in Europe just over a month before the attack.

President Emmanuel Macron has called the deadly stabbing an “Islamist terrorist attack” and announced increased surveillance of churches by France’s military patrols in the Sentinelle to be reinforced to 7,000 troops from 3,000.

Security in schools would also be strengthened, he said.

“Clearly, it is France that is being attacked,” the president added, promising the country “will not give up our values.”

The attack took place at a time of growing anger among Muslims in many countries over the issue of French cartoons of the Prophet Mohammad, which they consider insulting and blasphemous.

It happened almost two weeks after Samuel Paty, a schoolteacher in a suburb of Paris, was beheaded by an 18-year-old Chechen. Paty had shown his students such comics in a class on free speech.

France, home to Europe’s largest Muslim community and hit by a series of militant attacks in recent years, has defended the right to publish such cartoons. Macron has insisted that France will not compromise on its fundamental freedoms of belief and expression.