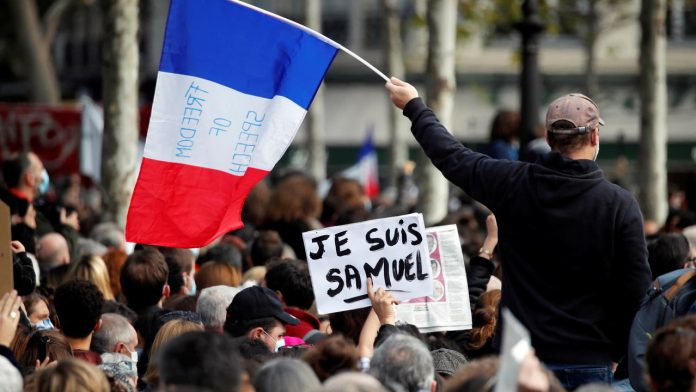 A sea of ​​banners reading #jesuisprof (I’m a teacher), #jesuissamuel (I’m Samuel) filled the Place de Republique in the heart of Paris on a sunny Sunday afternoon.

“We are all Samuel. We are also teachers. And we do not want to be killed just to do our job, ”said Hélène, who came to the demonstration with her colleague Marie. “We have traveled from the suburbs. Where we live does not differ much from where Samuel lived. We refuse to be afraid to go to work. ”

The beheading of history and society teacher Samuel Paty in a suburb of Paris on Friday sparked anger across France and evoked memories of the deadly wave of Islamist violence in 2015 that began after caricatures of the Prophet Mohammed were published by the satirical magazine Charlie Hebdo.

“A teacher was killed for doing his job,” said Dominique Sopo, president of SOS Racism, speaking to a certain quiet and solemn crowd packed into every corner of this huge space.

Sopo was the first of a number of speakers and was followed by leaders from teachers ‘and students’ unions. Their message was unified. “Shock and sadness are how we feel. This behavior is not acceptable in France or anywhere. ”

More than 1.5 million people gathered in the Place de République in 2015 to protest the deadly attack on the magazine’s office, and the hashtag #jesuisCharlie (I’m Charlie) went viral around the world.

Meetings in honor of Paty were also held in other cities across France on Sunday, including in Lyon, Toulouse, Strasbourg, Marseille and Bourdeaux.

“I was shocked. I first felt shock and then anger. And of course sadness. How should we live now? Asked Yasmina from east of Paris and spoke to FRANCE 24. “The government must act now. This can not continue. Paty taught the message of the republic, he taught his students to understand the meaning of freedom. He was killed for it. ”

“I always buy Charlie Hebdo, we need freedom of speech,” said Marie-Christine, another teacher. “But I do not want to talk about this attack with my students because I know they can make remarks, provocations.”

The audience consisted of a mix of older people and families. There was some cheering, some clapping, some crying and some moving singing as a small group began to sing “Adieu Monsieur Le Professeur”, and it curled gently over the audience, an ode to a dismissed teacher. There was no aggression, just a genuine feeling of sadness and frustration.

When Sopo called for a minute of silence, it stretched well over 60 seconds. No one was willing to break this moment with respect for Paty. The silence was followed by deafening applause.

“He (Paty) could have been one of my students, I completely identify with him,” said Natalie, who trains young teachers. “I was also here in 2015 after the Charlie Hebdo attacks, but today, unfortunately, there seem to be fewer people. If I had not come, I would not have looked at myself in the mirror I had to come this afternoon. This is a teacher who only did his job. ”

Some place the responsibility on the French government. “The government has been too scared of the issue of Islamism. It is a problem that they have a hard time accepting, but you have to call it that. You can not mix everything. You can’t use religion to carry out attacks, “said William, a pensioner.

“Everyone has gathered here today to simply be together. This act was both incredible and completely believable. We were shocked and did not expect it, and yet it was almost inevitable, ”Marc, a sound engineer, told FRANCE 24.

“There is no simple answer, the government can not just react to an event, they really have to make profound changes. They must act now. They can not wait for many events like last Friday, “he added.

Tribute to murdered French teacher: ‘Democracy is attacked by fanatics’

Others felt that it was a calling to talk about their responsibilities as teachers, that they should continue to teach and be free to teach as needed. “As a kindergarten teacher, I came here to defend my mission of educating, to sharpen my students’ critical thinking skills,” said Elodie. “This makes me want to teach even more. There will be a before and after this awful event. ”

“This was a barbaric and brutal act that attacked freedom. And freedom is one of the cornerstones of French identity. Liberté, fraternité, egalité: They make us like the French. We can not accept that they are being challenged in this way, ”said Sara, a colleague who traveled to the demonstration from Fontenay-sous-Bois, a municipality east of Paris.

Paty had been the target of online threats to show caricatures of the Prophet Mohammed. He taught moral and bourgeois instruction class on October 5 at his school in Conflans-Sainte-Honorine, northwest of Paris. These classes are mandatory and cover topics including secularism, the death penalty and abortion.

A poster reading “Je suis Samuel” (I am Samuel) on the Place de la République in Paris. © Sophie Gorman, FRANCE 24

Friday’s attack was the second such incident since a trial began last month over the massacre in January 2015 on Charlie Hebdo’s satirical magazine, which had published caricatures of the Prophet unleashing a wave of anger over the Islamic world.

In the course of the trial, the magazine published the comics shortly afterwards, a young Pakistani man injured two people with a meat clover outside Charlie Hebdo’s former offices in Paris.

French President Emmanuel Macron’s office said a national tribute would be held for Paty on Wednesday.