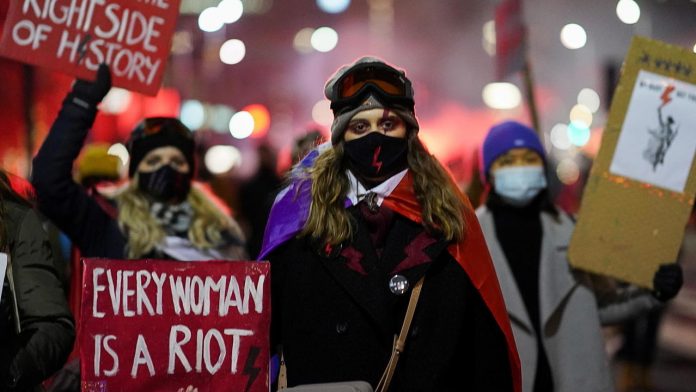 Several thousand people marched through cities across Poland on Friday during a third night of protests against an almost total ban on abortion since it was implemented by the Conservative government earlier this week.

Despite coronavirus restrictions, hundreds gathered in central Warsaw chanting “freedom, equality, abortion on demand”. Some had placards with the text “I am afraid to live here” and “Prohibition of abortion discriminates against the poor”.

The protests follow from a constitutional court ruling from October that terminating pregnancies with birth defects was unconstitutional, eliminating the most widely used case of legal abortion in the predominantly Catholic nation.

The verdict came into force late on Wednesday when it was published in the official newspaper.

Under the new rules, abortion can only be performed legally in cases of rape or incest and when the mother’s health or life is in danger, making Poland outside the European mainstream. Doctors who defy the law are facing imprisonment.

The country was shaken by weeks of nationwide protests following the court ruling on October 22. They had quickly turned into an outburst of anger against the Nationalist Law and Justice (PiS) government and the powerful Catholic Church.

PiS has rejected the opposition’s allegations that it had influenced the court in its decision, even though it is one of the judicial bodies that PiS revised during reforms that the European Union said has politicized the courts.

Abortion has been a very divisive issue since PiS came to power in 2015 and promised a return to a traditional, pious society mixed with generous government dividends.

Krzysztof Sobolewski, a senior PiS official, said the protests were illegal because of social distancing restrictions to curb the coronavirus pandemic.

In Warsaw, riot police stormed major roads in Warsaw as protesters marched on Aretha Franklin’s “Think” and “We Will Rock You” by Queen.

Poland reported 6,144 new infections and 336 deaths and has seen more than 1.2 million cases.