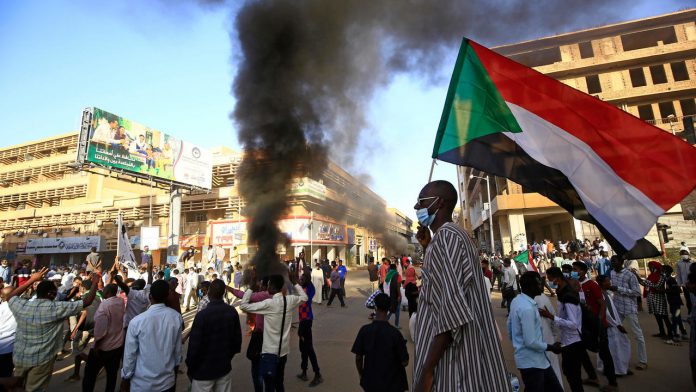 Thousands of Sudanese protesters took to the streets of the capital Khartoum and its twin city of Omdurman on Saturday, demanding an acceleration of reforms on the second anniversary of the start of an uprising that ousted Omar al-Bashir.

The veteran leader was ousted by the military in April 2019 after months of mass protests against poor economic conditions and Bashir’s autocratic three-decade rule.

Many Sudanese are dissatisfied with what they see as the slow or even negligible pace of change during the transitional government that has struggled to fix an economy in crisis.

The government was formed under a three-year agreement on the division of power between military and civilian groups that is intended to lead to fair presidential and parliamentary elections.

The country also has a civilian cabinet of technocrats led by Prime Minister Abdalla Hamdok.

“We have come out today, not to celebrate the anniversary or to congratulate the transitional government. “Unfortunately, for the past two years, this government has not made any progress in retaliating against our martyrs,” protester Waleed El Tom told state television in Khartoum.

Hundreds of Sudanese civilians were killed in protests before and after the former president’s expulsion.

On Saturday, thousands of other protesters gathered outside the abandoned parliament building in Omdurman, across the Nile River from the capital. Small protests took place in other cities across the country, state media say.

The economy is deteriorating

At the top of the protesters’ demands is the formation of a long-awaited transitional parliament, part of the power-sharing agreement, to adopt the necessary legislation to build a democratic state.

Others demanded the dissolution of the sovereign council, the government and the ruling coalition.

Sudan’s economy has deteriorated since Bashir’s removal, as the weak transitional government has failed to launch reforms and halt a fall in the Sudanese pound on the black market.

On Saturday, Hamdok promised to respond to the protesters’ demands.

“We promise to stimulate the pace to meet all the demands of the revolution, and to improve living conditions and the economy are among the priorities where we will do everything we can to meet the challenges,” he said on Twitter.

Lieutenant General Abdel Fattah Al-Burhan, head of the Governing Council, said on Twitter that the army would remain “guarantor and protector of the revolution and its gains”.

Security was tightened in Khartoum and Omdurman but no major incidents of violence or death were reported.

The Sudanese government has signed peace agreements with most of the rebel groups that caused unrest under Bashir’s rule, and hopes that the United States’ recent decision to remove the country from its list of state sponsors of terrorism will help the sick economy.