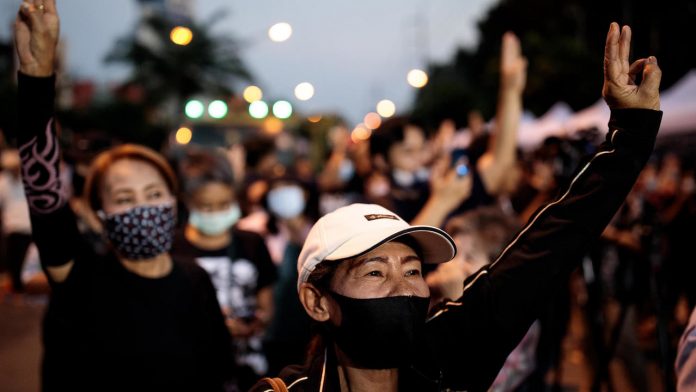 Thousands gathered on Sunday at a major crossroads in Bangkok to renew calls for Prime Minister Prayut Chan-O-Cha to step down after ignoring a deadline set by protesters who have posted unprecedented challenges for the regime.

The former military chief, who staged a coup in 2014, is facing pressure from a student-led pro-democracy movement that has been organizing massive demonstrations for months.

They consider his seizure of power – extended after last year’s highly controversial election – illegal and gave him three days to resign on Wednesday.

After the deadline came and went, thousands gathered in the center of Bangkok’s Ratchaprasong junction, surrounded by shiny shopping malls and monitored by traffic police.

“If Prayut insists on not stopping, we will continue to insist on getting out to remove him,” said organizer Jatupat “Pai” Boonpattararaksa, who had called for the protest the night before.

He reaffirmed the movement’s three core demands – Prayut’s resignation; a rewriting of the military-scripted constitution in 2017; and for authorities to “stop harassing” political opponents.

“I want Prayut to think like a citizen rather than a prime minister,” said 43-year-old Nuch. “The economy is really bad – since he can not solve the problem, he has to resign and let someone else do it.”

Despite the complaints, there was a festive atmosphere as protesters sang songs and bought caps embossed with the three-fingered greeting – a symbol of democracy borrowed from the popular films “Hunger Games”.

The surrounding roads were closed, with business students stationed near the barricades to search for protesters – a sign of concern about potential violence – before the end of the demonstration at 21.30 (1430 GMT).

Prayut remained determined Saturday while attending a country prayer service at a historic temple in Bangkok, saying “all problems can be solved” through compromise.

He told reporters he “will not quit”.

The movement is largely leaderless, although the various groups are united in demanding a revision of Prayut’s government.

Some have made controversial calls for reform of the kingdom’s unassailable monarchy and questioned the role of King Maha Vajiralongkorn – once a taboo act due to draconian royal defamation laws.

The monarch has been back in Thailand for the past week and a half to celebrate a Buddhist holiday and the death of his late father Bhumibol Adulyadej.

He has not commented on the demonstrations despite tensions in Bangkok as protesters become more courageous in their challenge to the royal institution.

But the king has paid infrequent public visits with his followers waiting outside the palace – a charm offensive for an army of local and international media.

On Friday, he broke with the royal protocol to praise a man who had held a portrait of the king’s parents at a pro-democracy gathering.

“Very brave. So good. Thank you,” the king said to the man, according to footage on Facebook.

Prayut had originally introduced emergency measures banning gatherings of more than four, but lifted them a week later when they could not stop tens of thousands who turned up for guerrilla demonstrations throughout the capital.

Many activists and protesters have been arrested, with several facing serious charges such as riots.

Dozens of royalist supporters gathered outside parliament on Sunday afternoon to protest the students, a day before a special parliamentary session was set to convene MPs to smash ways to ease tensions.

Thais abroad have also held demonstrations in solidarity with the student movement, with some rallies in Tokyo on Sunday waving three-fingered greetings while protesters in Seoul held signs saying “Restore power to the people”.