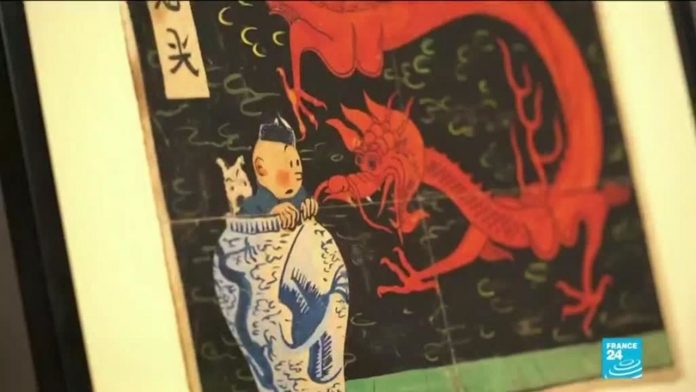 The object, which was intended as a cover for the volume “The Blue Lotus” from 1936, easily broke the previous record for sales of comic book art of 2.65 million euros, which was reached in 2014 for a double-sided drawing by Herge.

The creation of gouache, ink and watercolor measures 34 x 34 centimeters (13 inches) and has Tintin and his dog Snowy coming out of a porcelain jar in front of a threatening depiction of a Chinese dragon.

It was judged too expensive to reproduce by Harge’s publisher, who eventually used a simplified version of the same scene for “The Blue Lotus” cover.

The sale price – higher than Artcurial’s estimate of € 2.2-2.8 million – underscores the huge appetite for original Tintin monuments, whose adventures have entertained people of all ages since the 1930s.

The buyer was a “private collector”, says Artcurial, without disclosing his identity.

“I’m not surprised by the price. It is one of the most beautiful and finest works by Herge that comes up for auction and it is a distorted market, says the Herge cinema and Tintin expert Michael Farr to AFP.

“Like all markets, it is a matter of supply and demand, and there is virtually no supply.”

In 2016, an original drawing from the book “Explorers on the Moon” was sold for 1.55 million euros, a record for a single comic book page.

Herge, a Belgian man with the real name was George Remi, had sold about 230 million Tintin albums when he died in 1983.

Rob Salkowitz, author of “Comic-Con and the Business of Pop Culture”, stressed that the best comic book work requires awards similar to art from investors and wealthy enthusiasts.

“Tintin is the most iconic and beloved character in the European comic book magazine, with fans all over the world,” he told AFP.

Close control of Herge’s estates, with his work kept by a personal museum in Brussels, means that few original works come on the market, which means “collectors can not be elective”, he explained.

The painting was sold at its astronomical price on Thursday, despite the fact that it had clearly visible fold marks through it.

It was offered for sale by the heirs to Tintin publisher Louis Casterman, who claims it was given by Herge to Casterman’s son, who kept it in a box.

Other experts have doubted this and said that the drawing is not dedicated unlike other gifts from Herge and may have been folded by the artist himself when he sent it by post to his publishers.

Nick Rodwell, the British husband of Herge’s second wife Fanny Vlamynck, who owns the rights to the Tintin work, has said that the painting rightly belongs in the Herge Museum in Belgium.

Comics Salkowitz believes that art by top European artists such as Herge, Moebius and Hugo Pratt, the creator of the Corto Maltese strip, will continue to attract buyers who are attracted by profits or the “bragging rights” offered by ownership.

“In the first place, comic collectors were enthusiasts, but now, with prices so high, the market also attracts investors and speculators looking for higher returns,” he said.

“Especially with so much surplus wealth wasting around the top 0.1 percent, the appeal of owning a unique piece that shows a world-famous character sweetens the incentive,” he added.

Farr said Herge would have been surprised by the prices of his work.

“He was a terribly modest person and he would have thought it was a lot of hassle if nothing else,” Farr said. “He probably would not think that anything from him could be worth so much.”