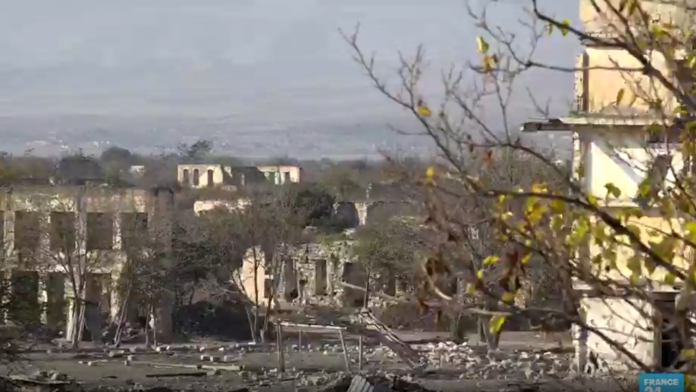 Azerbaijan has moved further into territory it took back from Armenian forces in the Nagorno-Karabakh conflict, following a peace deal with Russian mediation on 9 November. Jowharreports from the city of Agdam – formerly an industrial hub, now reduced to rubble – the cost of redevelopment looks colossal.

Agdam was an Azerbaijani city that was once home to some 40,000 people before falling to Armenian forces in 1993 during the first Nagorno-Karabakh war. Three decades later, Azerbaijani forces have recaptured it.

But they have returned to discover that a single mosque is the only building still standing in the city – with houses stripped down.

“How is it possible to destroy a city like this, to destroy all these houses?” said Kasimov Mehmetoglu, a member of the New Azerbaijani political party. “You should have seen what it was like at that time, it was beautiful, modern. They knew they would never live here. They could not live here, they destroyed everything. ”

Demining is an urgent priority and reconstruction: Agdam is full of mines, as are all the other buffer zones that Azerbaijan took over in the Nagorno-Karabakh conflict. “We estimate that it will take 3 to 5 years for people to be able to come back and live here, but 15 years to remove every last mine,” said Idriss Ismayilov, who works for Azerbaijan’s National Mining Authority.

Azerbaijani authorities estimate the damage to reclaimed areas to be over $ 100 billion (€ 84 billion) and are preparing massive compensation lawsuits against Armenia.

Analysts said the Russian-brokered deal to end the conflict benefited all players involved – Azerbaijan, Russia and Turkey – except Armenia.