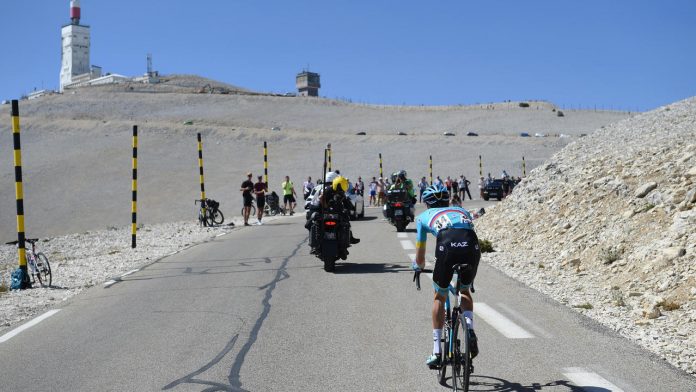 Tour de France chiefs on Sunday unveiled the route to the 2021 edition with two ascents of the iconic Mont Ventoux the same day and a crucial second-time attempt through the Bordeaux vineyards.

From June 26 to July 18, a three-week four-day race begins in Brittany, culminating in a sprint along Paris’ famous Champs-Elysees.

Occasionally the race sweeps through the Loire Valley and into the Alps, continuing to the south coast and Provence as a precursor to some epic climbing in the Pyrenees.

Then comes the showdown in the Bordeaux wine region before the formalities in Paris, where Tadej Pogacar celebrated a shock triumph this year.

Traditionally unveiled in front of 4,000 people at a glittering ceremony with most of the best cyclists and mayors of the cities along the route, Covid-19 again caused a rethink.

The unveiling event was instead a live TV unveiling with race director Christian Prudhomme master of ceremonies.

The route is a departure from the last two editions, which contained only a few individual time trials.

Next year has two of them, while old-fashioned mountain climbs are back on the menu, after the last two trips included many more shorter hikes.

Any rider with ambitions to win the 2021 ride will have to excel in time trials with as much as 58 km on the agenda.

They will also need to be able to survive the lung-busting long climbs.

Mont Ventoux, known as the ‘giant of Provence’, with the upper reaches of its lunar landscape, has to be climbed twice the same day, while the ski resort of Tignes is also included.

“It’s all there for the climbers too,” suggested Prudhomme, while France’s two top climbing specialists were more cautious.

“I am there,” said Romain Bardet, who described the route as traditional.

“But it does not suit my preference for gathering large, tiring mountains,” he said.

“There is less there than usual for the climbers, but it is still an interesting course,” said France’s popular competitor Thibaut Pinot.

“We had to be pragmatic,” Prudhomme said of returning to old-fashioned tours.

“It’s hard to draw conclusions from last season, even with some younger riders’ astonishing performances,” he said, referring to then-21-year-old Pogacar, who won this year, and 25-year-old Tao Geoghegan Hart, who claimed the Giro d ‘Italy.

One aspect that has been preserved from the last two years is that the action is loaded to explode early, at phase two the short steep climb called the Mur de Bretagne ends.

This is where a rider like French world champion Julian Alaphilippe has a perfect chance to grab the overall leader’s yellow jersey for the third year in a row.

“So we have tried to vary things to the maximum, there is no dogma, but we went for maximum change taking into account the shift from Copenhagen and all the coronavirus effects,” said Prudhomme, who sat for a week in the 2020 edition. after testing positive for coronavirus.

The trip starts a week early to avoid clashes with the Olympics in Tokyo and had to quickly reorganize the start, after the originally planned big departure in Copenhagen was canceled to accommodate the European Football Championship.

“We needed a new Grand Depart and to make it a week earlier,” Prudhomme said of preparations he described as a race against the clock.

In the beginning of 26. June in Brest, track designer Thierry Gouvenou said it was exciting to get permission to drive in the race.

In 2020, Green Party mayors of Lyon and Rennes expressed opposition to the Tour de France.

“There were also (municipal) elections and we made you wait, it was quite tense, we planned a third of the track before the delayed 2020 race and then the rest afterwards.”