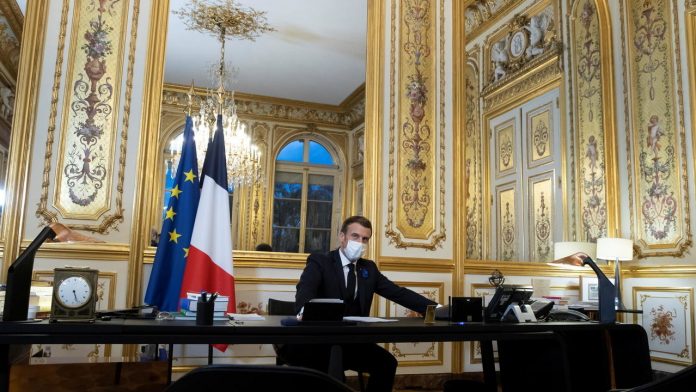 “The President of the United States repealed the failure of European countries to pay for their own defense in sharp terms:” We can not continue to pay for the military protection of Europe while the NATO states do not pay their fair share and live off the country’s fat, “he said. . “We have been very generous to Europe and it is now time for us to look out for ourselves.”

This was not Donald Trump but John F. Kennedy who spoke privately at a meeting of the National Security Council in January 1963. American concerns about low European defense spending go back to the Cold War. But the United States limited its concerns while the Soviet Union posed an existential threat and its Iron Curtain hung over the old continent.

In 2011, US Secretary of Defense Robert Gates warned that ties to Europe were likely to fade with memories of the Cold War, as his boss, former US President Barack Obama, swung to Asia. “If current trends in the decline of European defense capability are not stopped and reversed, future American political leaders – those for whom the Cold War was not the formative experience it was for me – may not think that the return on US investment in NATO is worth the cost, Gates said.

Obama made European “free riders” threshold in an interview in 2016 with The Atlantic. He pointed to former French President Nicolas Sarkozy and former British Prime Minister David Cameron to rely on the United States during Libya’s intervention in 2011. “I had more confidence in Europeans, given Libya’s proximity, that I invested in the follow-up,” Obama said.

In this context, Trump’s insults, tariffs and the withdrawal of troops from Germany can be seen as a lush culmination of friction between the United States and Europe.

“Trump marked an increase rather than a real change in US-EU tensions – although at no time did the US raise the issue of conditionality between US treaty obligations and European defense spending,” said Martin Quencez, deputy director of the Paris bureau. German Marshall Foundation, a think tank dedicated to transatlantic cooperation.

Following Biden’s victory, European Commission President Ursula von der Leyen told a meeting of European ambassadors that “some changes in priorities and perceptions go much deeper than a politician or administration” and will not “disappear due to an election”.

With Biden in the White House, “it will undoubtedly be less unpleasant, but not fundamentally different,” a source in the French government told Agence France-Presse on condition of anonymity.

Thus, the American election revived the European defense issue. Ahead of the vote, German Defense Minister Annegret Kramp-Karrenbauer wrote a Politico leader entitled “Europe Still Needs America”. AKK, as she is called, argued that “illusions of European strategic autonomy must end: Europeans will not be able to replace the crucial role of the United States as a security provider” – even if Europe were prepared to use “more muscle, where needed” in the environment. regions.

“Strategic autonomy” is at the heart of French President Emmanuel Macron’s European vision – economic, technical and military independence. He said he “deeply” did not agree with AKK’s comments in a comprehensive interview with the French geopolitical magazine Le Grand Continent on November 16.

France’s center-right leader described the transfer of power in Washington as an “opportunity” to “build our independence”. Europe has a “different worldview” and “different geography” than the United States, so it is “not sustainable for our international policy to depend on it or follow it,” Macron said.

“Macron wants what he calls European strategic autonomy, but it is very clear that the Germans do not think of this in a similar way,” said Helen Thompson, a professor of political economy at Cambridge University. “It is very difficult to see how to come to a European strategic decision-making capacity, let alone a real operational capacity to act on any of it.”

The French president told The Economist in 2019 that the United States’ disconnection from Europe has made NATO “brain dead”.

“I think the Americans are quite nervous about Macron’s position when European strategic autonomy turns into something that becomes anti-NATO,” Thompson said.

As it now stands, “strategic autonomy” also looks limited by low defense spending. The United Kingdom, Greece, Poland, Romania, Bulgaria and the three Baltic States are the only European NATO members to meet the organization’s target of 2% of GDP. France’s figure was 1.84 percent in 2019.

Germany was 1.36 percent, with an increase of less than 0.2 percent of GDP from 2015 – when its military had so few resources that it used brooms instead of weapons during NATO training. It aims to reach 1.5 percent by 2024.

“Is that enough? No. Is it fast enough? No,” said Thomas Kleine-Brockhoff, vice president and Berlin bureau chief for the German Marshall Foundation.

Trump’s foreboding caused 2 percent to target anathema for much of Germany’s political class – especially the Social Democratic Party, the junior party in Angela Merkel’s ruling coalition. Given these domestic constraints, the country’s defense spending from a low base is already “significant,” Kleine-Brockhoff said.

Macron’s line with AKK is a “tragic misunderstanding”, he continued. “AKK should be his closest ally; she is one of the few German politicians that you can see standing in an election while she supports the goal of 2 percent. “

But the concept of “strategic autonomy” that Macron discussed in his Le Grand Continent interview encompasses much more than defense; he also focused on avoiding dependence on American or Chinese technology and protecting European companies from the arms of the American legal system from the hegemony of the dollar.

“Looking at it in this broad sense, there is much more support across Europe for this idea of ​​strategic autonomy,” said Pierre Vimont, French ambassador to the United States from 2007 to 2010, now a senior colleague at Carnegie Europe.

France imposes its sovereignty on large technology companies by imposing a tax on digital services after years of complaining that they pay little tax on their European profits – with authorities demanding millions of euros last week from Amazon and Facebook. In July, the United States promised to respond to such a tax with a 25 percent duty of $ 1.3 billion (€ 1.1 billion) on French luxury goods.

Several other European countries, including the United Kingdom, are expected to introduce similar technical taxes in the following year, despite US threats.

Democrats as well as Republicans insist that European countries must continue with the OECD (Organization for Economic Co-operation and Development) negotiations on a multilateral tax agreement – despite the US pulling out in June after a long dead end. Taxes on big tech’s French revenue are an “escalation toward U.S. employers,” Ron Wyden, the Senate’s highest-ranking Democrat in the finance committee, told the Financial Times last week.

For Macron, US escalation against French companies is the problem. France’s largest bank, BNP Paribas, had to pay a record $ 9 billion (€ 6.6 billion) in 2014 for violating US sanctions against Cuba, Sudan and Iran. “The extraterritoriality of the dollar” is a “deprivation of our sovereignty,” the French president told Le Grand Continent.

“It’s definitely been a tit for tat,” Thompson said. “The more French banks have been fined, the stronger the French have become on digital taxes on Amazon. And I think that dynamic does not disappear under Biden. ”

However, an intense bipartisan consensus in Washington considers China – not Europe – as its antagonist of technology and trade.

On the other side of the Atlantic, Macron emphasized in his Le Grand Continent interview that what he said about the need for European independence from the United States was even “truer” when it came to China, when he rejected Beijing’s “game” “plays down values ​​and principles” .

The EU envisages that Biden will work for “close cooperation on China and the challenges it poses in terms of unfair trade practices, security and other issues where we both have concerns”, wrote EU High Representative for Foreign Affairs Josep Borrell in a blog post in early November.

“We have already seen convergence between the United States and the European Union over China over the last twelve to eighteen months,” Quencez said. “Covid-19 has already accelerated this convergence, and working on a common China strategy could be a kind of glue in the transatlantic partnership for many years to come.”

“Europe is not being challenged by American technology companies but by Chinese companies under the authoritarian control of the Communist Party,” Kleine-Brockhoff added. “Therefore, we should try to build powerful technical platforms within a Western, not a European framework.”