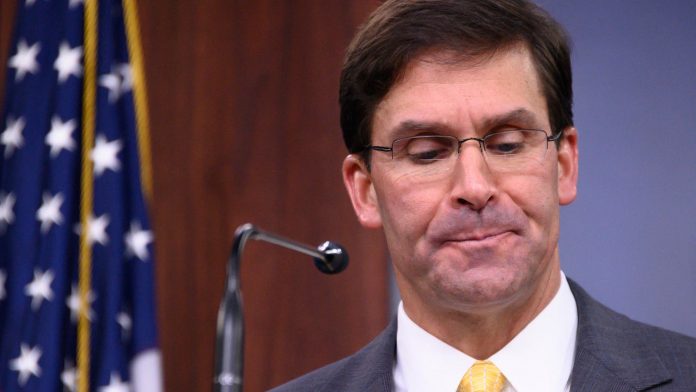 US President Donald Trump said on Monday that he had “finished” Defense Minister Mark Esper, signaling that he could use his last months in government after the election defeat to resolve points within his administration.

Trump had split with Esper over a series of issues and was particularly outraged by his public opposition to Trump’s threat to use active military forces this summer to suppress street protests over racial justice after police killed George Floyd in Minneapolis.

Democrats reacted with concern, saying that Trump’s move sent a dangerous message to America’s opponents and dampened hopes of an orderly transition as President-elect Joe Biden prepares to take office.

“The sudden dismissal of Secretary Esper is worrying evidence that President Trump intends to use his last days in office to wreak havoc in our American democracy and around the world,” said House Speaker Nancy Pelosi.

Trump said on Twitter that Christopher Miller, head of the National Counterterrorism Center, took over as acting secretary of defense.

“Mark Esper has been terminated,” Trump wrote in a tweet, adding that Miller would be acting secretary “takes effect immediately.”

… Chris will do a GREAT job! Mark Esper has left. I want to thank him for his service.

U.S. defense officials spoke on condition of anonymity, saying White House Chief of Staff Mark Meadows called Esper minutes in advance to warn him that Trump would shoot him via Twitter.

When Trump launched a swift, ceremonial exit for Esper, Miller arrived at the Pentagon building just an hour or so after Trump’s announcement – before the Pentagon itself had even issued a statement acknowledging Esper’s dismissal.

It was unclear if Esper was still in the building when Miller arrived.

Sources said that Esper had long been preparing for his resignation or dismissal after last week’s election, especially if Trump were to win a second term. However, the fact that he fired Esper even after losing the election was not a given.

In a letter to the Department of Defense, issued early Monday night, Esper said he stepped aside aware that “there is much more we can accomplish.”

Esper praised the military for remaining “apolitical”, a chorus he often used and which Trump’s opponents saw as implicit criticism of the president’s attempt to portray the military as his constituency among defense budget increases.

Paul Frymer, a professor of politics at Princeton University, said Trump’s firing via Twitter was “typical of his entire presidency” and warned that it could endanger Anthony Fauci, director of the National Institute of Allergy and Infectious Diseases, which also has collided. with Trump.

“He cannot control his impulses or temperament and he demands loyalty to him over politics, constitution or anything else,” Frymer said.

Trump has had a troubled relationship with the Pentagon, where Esper and top brass have repeatedly tried to avoid being seen as a political instrument for the Trump administration.

Esper’s predecessor, Jim Mattis, left in 2018 due to political differences with Trump, including Syria. In June, Mattis criticized Trump as “the first president in my life who does not try to unite the American people – do not even pretend to try. Instead, he tries to divide us. ”

Like Mattis, Esper also disagreed with Trump’s rejection of the NATO alliance and was wary of Trump’s tendency to see US military alliances through an explicit transactional lens, even though he supported Trump’s calls for allies to increase defense spending, sources said.

But he also shared with Trump headlines, including Esper’s desire to protect Alexander Vindman, then a senior lieutenant who worked at the White House, from retaliation over his testimony in Trump’s constitutional inquiry.

Michael O’Hanlon of the think tank Brookings Institute said he did not think Trump was likely to launch a vicious shake-up of US national security policy despite firing Esper.

“He will want to believe that he has some kind of reasonable legacy – in economics, to strengthen the military, not to start new wars,” O’Hanlon said, noting that Trump may want to try to run for office again in 2024.