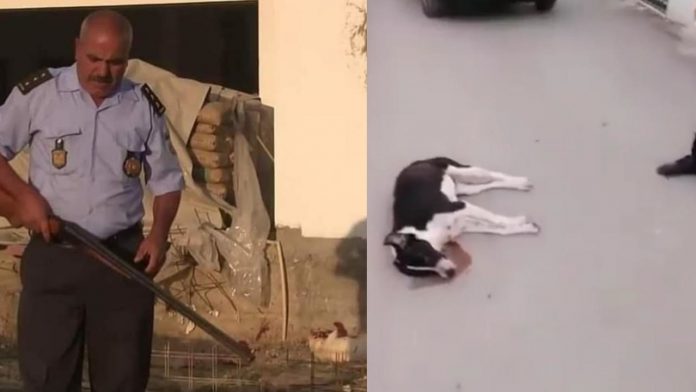 Graphic images and videos of dogs shot and killed by Tunisian city workers have been circulating online since late November. Animal rights activists as well as people living in neighborhoods where murders take place have taken to social media to protest what they say is a “barbaric” campaign. Our observers say that both the government and the citizens share the blame for this massacre.

WARNING: Some readers may find the images in this article shocking

Several cities across Tunisia announced on November 27 that they would launch a two-week campaign to kill stray dogs, stating that their goal was to reduce the number of stray animals in urban areas and prevent the spread of rabies. Since the start of this brutal campaign, social media has been flooded with videos and photos taken by terrified locals showing city workers in Tunis shooting and killing animals.

A militant for animal rights launches the alert on Facebook. Screen capture. © F24

This Facebook post by Yasmine Azaiez Animal Rescue reads: “15 days to kill stray dogs in greater Tunis. Keep your dogs inside and everyone else you can save. Thanks.”

Tunisian city officials often carry out this type of death campaign, despite fierce protests from animal rights organizations. In 2107, the city of Tunis established sterilization centers for stray dogs. After being sterilized, the dogs were released back to the city with ear tags. But during this latest campaign, eyewitnesses have reported that city workers have killed tagged dogs along with the others.

An animal rights activist is sounding the alarm on Facebook. © France 24 screengrab

Terrified by the graphic images of dogs being slaughtered, concerned citizens launched an online campaign demanding that animal cruelty be criminalized. They said the assassination campaigns were “barbaric”.

This social media user heard gunshots fired on the night of November 24th. He found a dog that had been shot and tried to save it by taking it to a veterinarian in Sousse, but it later died of bleeding.

Given the wave of online anger, the mayor of Tunis announced that he was “hostile to this barbaric act” and that the city government would not take part in the national campaign to eradicate stray dogs. However, the residents of the city proved through the photos they captured that this announcement was not respected on the ground.

An internet user announces the operation in a suburb of the capital. © F24

This post by Christiane Schmelzer reads: “Last night at 23.00, in the Nour Jafaar housing projects, Raoued, all our dogs were murdered. The mayor promised us that they would stop dead dogs. REST IN PEACE.”

“The body is sometimes left just there; it’s a horrible sight ”

Amal Hattab is a veterinarian who works at a shelter in Tunis called “Protection for stray animals”.

There are many veterinarians who work voluntarily to sterilize the dogs in our shelter. We are currently doing the rounds in the districts of Tunis to pick up dogs that have been shot to bring them back to our center for treatment. Most of these dogs are not aggressive at all. They actually need help. We work with trainers who take care of the dogs that are most fragile and scared.

City officials in Sousse banned the killing of tagged dogs. But many witnesses took photos and videos that showed that city workers were still carrying out their deadly campaign late at night. In Tunis, no concrete measures were taken to stop the assassination despite many appeals to the mayor.

In Tunisia, the Municipalities are slaughtering the rabbits with the chevrotine

In Tunisia, the slaughter of errant rabbits is still practically practiced © Les Observateys

This video, filmed in Sousse, was streamed live on November 27th. The film, which is terrifying, says: “City workers just killed it … look, they used buckshots. The poor thing, they riddled it [with bullets]; they chased it and killed it. ”

I do not know what to do. He was injured by a ball “, commented this Kasserine (west) internet user. © F24

“I do not know what to do. He was shot, says this social media user in Kasserine. © France 24 screengrab

City workers focus their campaign on residential areas. Many people complain that these stray dogs make too much noise and contact the city to ask that they be killed. Sometimes stray dogs can be dangerous, especially if they have rabies, but there is all the more reason to place them immediately in a shelter, away from humans and other dogs.

There are also many dogs that do not die immediately from their wounds and suffer a lot without access to food or water.

Sometimes the bodies are just left on the street and they start to rot. It is a horrible and shocking sight for everyone.

The person who filmed this video on December 5 in Bou Salem says: “In a quarter of an hour, the students at Hédi Nouira Middle School will start the day with a disturbing sight. […] this dog was shot during the night. ”

The shelter and centers need financial support from the city to pay for medicine and care. We have focused on spaying female dogs because we do not have the opportunity to sterilize them all. The number of injured dogs that we take care of is increasing. There are currently about 100 dogs in the shelter. We must urgently create more animal shelters in Tunis because veterinarians cannot keep the animals in the long run.

In Tunis, veterinarians and activists have worked together to set up shelters and parks.

“This is a reflection of the general perception of animals in Tunis; people do not respect wildlife ”

Amal Ben Mohamed, 46, currently cares for about 50 animals in his home in the working class area of ​​Kabaria, where a large number of stray dogs have been slaughtered.

City workers should not act alone. They must work together with a veterinarian and a representative of the Regional Commission for Agricultural Development, who can identify if the animal has rabies and thus if it is necessary to kill it.

“Look at the buckshot that the city used here in Jendouba. [The dog] bore eight puppies. ”

To me, this is a reflection of the general perception of animals in Tunis. humans do not respect wildlife. If this were not the case, the government would not dare to slaughter animals in this way. There is no law to protect stray dogs. [Editor’s note: According to article 317 of the Tunisian penal code, a person can be sentenced to 15 days in prison and fined 4.80 dinars (equivalent to €1.46) for abusing a domestic animal, either their own or one belonging to someone else, but this doesn’t apply to stray animals.]

Many of us have reached out to the city because we want to help them take care of these dogs. We have made many donations. In recent months, we have spent all our time caring for these animals. We want to create a service for the care of inverted animals within the city government to deal with this issue in a more efficient and humane way.

The government must work to gradually change this mentality and start campaigns to raise awareness for young people so that they get used to animals in public space and no longer fear them.

The city of Tunis reported that 145 dogs were sterilized or neutered and vaccinated against rabies by 2020. They claimed that they only killed dogs in the most extreme cases. France 24 observer teams contacted them but received no response. we will publish it if they submit it.