Home World Tunisians are calling for the prosecution of lawmakers who condoned the murder...
Facebook
Twitter
WhatsApp
Linkedin
LINE 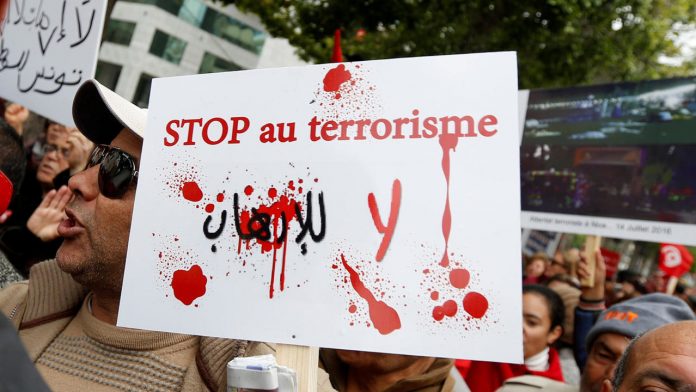 Dozens of Tunisian artists and intellectuals have signed a petition calling on the country’s judiciary to prosecute a lawmaker who justified the gruesome killing of a French teacher Samuel Paty by an Islamist radical.

Signatories to the petition accused Tunisian lawmaker Rached Khiari of “condensing terrorism” in a social media post he wrote the day after Paty was murdered outside his school in a Paris suburb.

“To celebrate learning Samuel Paty’s beheading in the daytime, as if it were divine punishment, is a form of indirect murder to celebrate on social media,” the petitioner wrote on the Change.org platform.

The signatories, including historian Sophie Bessis and former minister Kamel Jendoubi, called on the Tunisian authorities to lift the legislature’s immunity and allow prosecutors to continue their investigation.

Paty, a 47-year-old history teacher, was stabbed to death outside his school in Conflans-Sainte-Honorine on October 16 for showing and discussing cartoons of the Prophet Mohammed during a class on tolerance and freedom of speech.

His gruesome killing of a radical Islamist has touched a raw nerve in France, five years after 12 people were killed in an attack on the satirical weekly Charlie Hebdo’s Paris office that had published the cartoons.

>> After the teacher assassination, a hunt for appeasers who ‘disarmed’ French secularism

One day after Pity’s assassination, Khiari, an independent elected under the colors of the Islamist party Karama, wrote on Facebook: “Insulting the Prophet Muhammad is the greatest crime. Those who commit (such crimes) must accept the consequences. ”

A special anti-terrorism brigade had been tasked with investigating the post on social media, Mohsen Dali, deputy prosecutor in Tunis, told AFP on 19 October.

According to one of the signatories, the Franco-Tunisian author and psychoanalyst Fethi Benslama, the fight against terrorism must focus on the hate speech of people in positions of authority, which often precede terrorist attacks.

“Today it is clear that we must fight against the people whose words give the green light to terrorist acts,” said Benslama FRANCE 24. “These are fatwas in disguise (…) who can swing a fanatic or a young person with mental problems . “

Like France, Tunisia has been shaken by a series of terrorist attacks in recent years, including the assassination of two prominent secular politicians by Islamist militants in 2013.

The country itself is deeply divided on issues of faith and freedom of speech. The uprising from the Arab Spring of 2011 has heralded freedom of conscience and belief, enshrined in a new constitution in 2014. But such freedoms have been challenged in the midst of an Islamist setback.

In recent days, several Tunisians have taken to social media to call for greater respect for the Prophet Mohammed, while others have stressed the importance of defending freedom of expression, including in religious matters.

The petition against legislator Khiari comes as calls for a boycott of French goods have spread across much of the Muslim world, in protest of comments by French President Emmanuel Macron defending the right to caricature the Prophet and other religious figures.

Delivered in the wake of Paty’s assassination, Macron’s robust defense of French secularism and his critique of radical Islamists have angered some Muslims, who see them as attacks on all Muslims.

France has called on Arab nations to prevent the “baseless” boycotts, saying they are “pushed by a radical minority” that distorts Macron’s words.