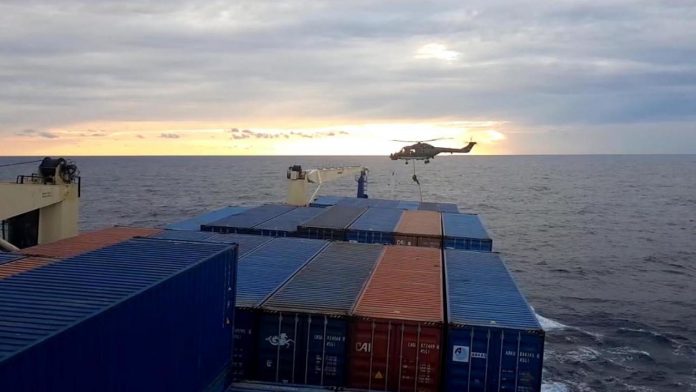 Turkey protested against Germany and the EU on Monday after German forces belonging to an EU military mission boarded and tried to search for a Turkish cargo ship that they suspected of having taken weapons illegally.

Soldiers from the Hamburg frigate, part of an EU mission carrying out a UN arms embargo, boarded Roseline A overnight but withdrew after Turkey objected to the EU mission, which had ordered the search, the German Ministry of Defense said.

Turkey released images showing armed men in military uniforms marching sailors with their hands on their heads on the bridge of what it said was Roseline A, at sea southwest of the Greek Peloponnese.

Germany’s Defense Ministry said Turkey had ordered a halt to the search and forced German staff to resign before completing their work. During their search, the German team had not found any cargo that violated the arms embargo, German Defense Ministry spokesman Christian Thiels told reporters in Berlin.

This was the second incident between Turkey and naval forces from a NATO-allied country carrying out a ceasefire against Libya. In June, NATO launched an investigation into an incident between Turkish warships and a French naval vessel in the Mediterranean, after France said one of its frigates was “ignited” three times by Turkish naval radar as it tried to approach a Turkish civilian ship suspected of involvement in arms trade.

The search ends for “persistent objections”

The Turkish Foreign Ministry said that the German warship’s personnel carried out the search despite the captain’s statements about what his ship was carrying. The search was completed after Turkey’s “persistent objections”, it is said.

“We are protesting against this act, which was unauthorized and carried out by force,” Turkish Foreign Ministry spokesman Hami Aksoy said in a statement. He added that Turkey can claim compensation for damages or losses.

Aksoy renewed Turkey’s criticism of the EU’s naval mission in Rome aimed at stopping arms shipments to Libya and which Ankara has accused of favoring Libya’s eastern-based forces against the Tripoli-based National Accord Government.

“Biscuits and other materials as colors”

A senior official said the German team ended its search aboard the Rosaline-A around dawn after “understanding that there was nothing but humanitarian aid, biscuits and other materials on board.”

The cargo ship continued on its way to Misrata after the search, the official said, speaking on condition of anonymity in line with Turkish government rules.

Thiels, a spokesman for the German Ministry of Defense, said the German crew had requested boarding.

“When there was no response, a German search team was flown by helicopter to the cargo ship and began the search, and the crew was ‘cooperative,'” Thiels said.

While the team continued its search, the German authorities were informed by Turkey that they did not allow it. The search was then completed and the team was sent back to the frigate, Thiels said.

The German official said the order on board the ship came from the mission’s operational headquarters in Rome.