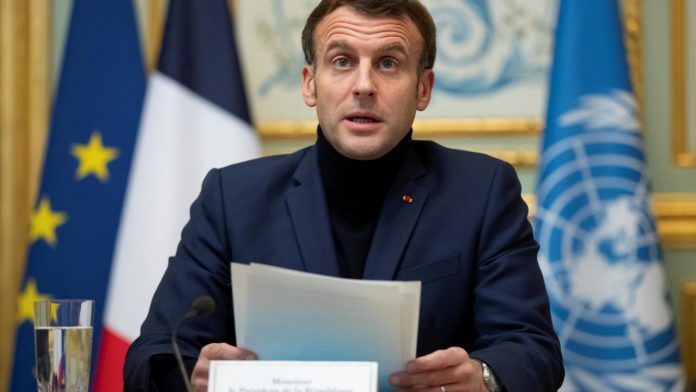 France and the United Nations pledged on Wednesday to continue providing humanitarian aid to Lebanon, but called on its leaders to form a new government as a political stalemate in Beirut has blocked billions of dollars in aid to the cash-strapped country plagued by several crises.

A meeting organized by the UN and France was the second since the catastrophic explosion on August 4 that destroyed the port of Beirut and destroyed large parts of the capital. The blast, which killed more than 200 people and injured thousands, was caused by the detonation of nearly 3,000 tons of ammonium nitrates that had been stored unsafe in a port warehouse for several years.

The explosion came amid an unprecedented economic breakdown – exacerbated by pandemic-related closures – which has led to high inflation, poverty and unemployment.

French President Emmanuel Macron and UN Secretary-General Antonio Guterres announced the creation of a fund managed by the World Bank, the UN and the European Union to provide support to Lebanon, including food, health care, education and reconstruction of the port of Beirut.

“Together, we can help the Lebanese people go beyond the emergency phase and on the path to long-term recovery and reconstruction,” Guterres said.

The plan also calls for “a targeted set of reforms, which are necessary to facilitate recovery and reconstruction,” he added.

Macron said Wednesday’s conference would “make it possible to complete the emergency and provide an early response to the recovery.”

But the French leader warned that the promised aid “will not replace the commitment of Lebanese political forces and institutions to form a government as soon as possible and implement a roadmap for reforms without which (long-term) international economic aid will not be released.”

In a horrific report published on Tuesday, the World Bank said Lebanon’s economy was facing a “severe and prolonged depression”, with real GPD expected to fall by almost 20% as its politicians refuse to implement reforms that would accelerate the country’s recovery.

Macron, whose country once ruled Lebanon as a protectorate, supported pursuing a relief program despite frustration with the Lebanese ruling class. Lebanon’s leaders continue to oppose reforms and have been unable to form a government since the last one left in the wake of the explosion.

“Commitments have not been met,” Macron said.

Representatives from 27 countries attended Wednesday’s meeting, including 12 heads of state and local Lebanese aid groups who, according to the French Presidency, have a central role as trusted partners.

A new government would be the first step towards implementing a French roadmap for reforms to enable the release of billions of dollars of international aid. Another important international demand is a central bank audit. The American consulting company Alvarez & Marsal withdrew last month from a forensic review which was instructed to say that it had not received the information required to carry out its work.

Lebanese President Michel Aoun said that “despite the obstacles faced by the French initiative, it must succeed because the crises facing the country have reached their peak.”

“I am determined, no matter what the cost, to follow the financial audit to the end to free the state from the corrupt economic, political and administrative systems to which it has been held hostage,” he added.

Aoun said Lebanon is negotiating a $ 246 million loan from the World Bank to deal with the economic downturn in the coronavirus pandemic and Lebanon’s emergency needs. The talks end this week.

The August 4 explosion, largely blamed on the carelessness of Lebanese politicians and security agencies, has drawn worldwide attention to the corruption that has plagued the country for decades, leaving it on the brink of bankruptcy with eroded institutions.

World leaders and international organizations pledged nearly $ 300 million in emergency humanitarian aid after the explosion but warned that no money for the reconstruction of the capital would be made available until Lebanese authorities commit to serious political and economic reforms.

The donors who promised the support will be coordinated by the UN and delivered directly to the Lebanese people, in a clear rebuke from the country’s entrenched and notoriously corrupt leaders.

The aid money is expected to go directly to NGOs and other organizations to distribute to the public and bypass the Lebanese government.