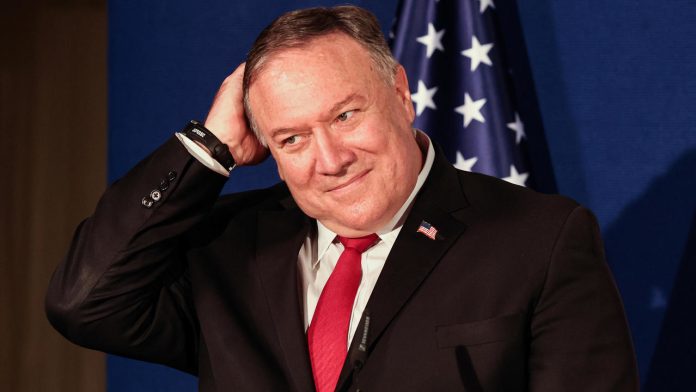 US Secretary of State Mike Pompeo will make the first visit by a top US diplomat to the Israeli-occupied Golan Heights on Thursday after an expected halt to a Jewish settlement in the West Bank and outraged Palestinians.

The envoy of US President Donald Trump, who has made a strong Israeli stance a hallmark of his turbulent period of power, also called the pro-Palestinian BDS movement a “cancer” that Washington would describe as anti-Semitic.

After meeting with Israeli Prime Minister Benjamin Netanyahu, a close ally, Pompeo announced that “today I will have a chance to visit the Golan Heights,” the strategic territory seized by the Jewish state from Syria during the 1967 Six-Day War.

Last year, the Trump administration made the controversial decision to recognize Israeli sovereignty in the Golan Heights – a move Pompeo on Thursday called “historically important and simply a recognition of reality.”

Pompeo also announced a new strong pro-Israel policy, stating that Washington would from now on appoint the “anti-Semitic” boycott, divestment and sanctions campaign, which seeks to isolate Israel over its treatment of the Palestinians.

“We will immediately take steps to identify organizations that engage in hateful BDS behavior and withdraw US government support for such groups,” Pompeo said in a joint statement with Netanyahu.

“We want to stand with all other nations that recognize the BDS movement for the cancer that it is.”

Israel sees BDS as a strategic threat and has long accused it of anti-Semitism, and a law passed in 2017 allows Israel to ban foreigners with links to BDS.

Activists strongly deny the accusation and compared the embargo with the economic isolation that helped lower apartheid in South Africa.

Pompeo – who has so far supported Trump in refusing to concede defeat to President-elect Joe Biden – is on what may be his last European and Middle East tour of the post.

He has no scheduled meetings with Palestinian leaders, who have strongly rejected Trump’s stance on the decades-old conflict, including Washington’s recognition of Jerusalem as the Israeli capital.

Pompeo was also expected on Thursday to become the first American top diplomat to visit a Jewish settlement in the occupied West Bank, where a winery has named one of its wines after him.

Palestinians have angrily condemned the expected visit to the Psagot vineyard near Ramallah, the site of the Palestinian Authority.

Dozens of Palestinians demonstrated from Wednesday in Al-Bireh, throwing stones at soldiers guarding the entrance to the settlers’ industrial area.

Israel’s planning and construction of settlements in the Palestinian territories has flourished during successive Netanyahu governments and especially since Trump took office in 2017.

Pompeo said a year ago that the United States no longer believes that Israeli settlements in the West Bank violate international law.

Bahrain’s Abdellatif al-Zayani said the historic US-brokered deal with the Gulf Kingdom and the United Arab Emirates had sought to normalize ties with Israel would help the dawn of “peace for the entire Middle East.”

“In order to achieve and consolidate such a peace, the Palestinian-Israeli conflict must be resolved,” the minister said. “I therefore call on both parties to come around the negotiating table in order to achieve a sustainable two-state solution.”

Trump’s outgoing administration has made the isolation of arch-enemy Iran a central part of its regional policy.

The United States and Israel – along with the Gulf states United Arab Emirates, Bahrain and especially Saudi Arabia – share a strong enemy against the Shia Muslim regional power Iran.

They accuse the Islamic Republic of trying to build a nuclear bomb, fueling unrest from Syria and Iraq to Lebanon and Yemen, and of trying to destroy Israel.

Pompeo warned the Islamic Republic in comments on Wednesday that the deals that the United Arab Emirates and Bahrain have reached with Israel showed that “its influence in the region is diminishing”.