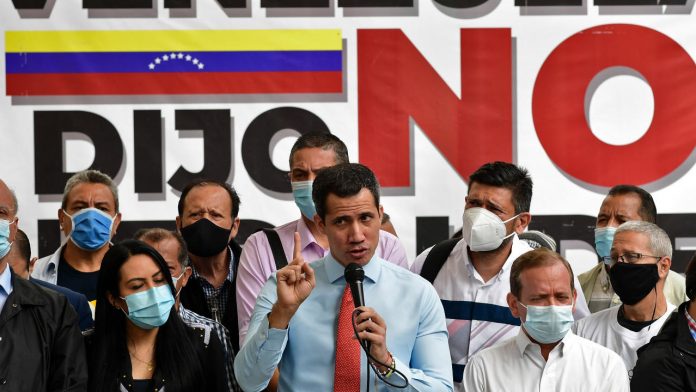 Venezuelan opposition leader Juan Guaido began a week-long referendum on Monday as President Nicolas Maduro claimed victory in the legislative election, boycotted by most of his opponents and criticized by Western leaders.

Guaido, the country’s self-proclaimed interim president, had called for a boycott of Sunday’s legislative polls, which saw the ruling United Socialist Party assert control of an enlarged 277-seat National Assembly – the only branch previously not in Maduro’s hands.

“Today, Venezuela is waking up to a new dawn of peace, joy, unity and the strengthening of democratic institutions,” Maduro said on Twitter.

However, most Venezuelans turned their backs on the vote, with a turnout of just 31 percent.

The election brought the country into a deep political and economic crisis – stifled by rampant inflation, an oil embargo and a lack of important supplies including water and gas.

The United States, the European Union and many Latin American countries have long blamed Venezuela’s economic crisis on Maduro’s repression and ill-treatment.

Guaido, 37, urged voters to stay home for Sunday’s vote because “free and fair” conditions for holding elections do not exist.

Instead, he and his allies opened a week-long referendum on Monday, seeking public support to extend the mandate of the current National Assembly until “free, controllable and transparent” elections can be held.

The referendum form “popular consultation”, using web and mobile phone apps, calls for the end of Maduro’s “usurpation” of the presidency.

“It is the chance to turn this rejection … into strength, into mobilization,” he told a news conference Monday, praising “higher-than-expected” participation in the virtual vote, even though he refused to give figures.

On Saturday, supporters will be able to vote in person at a polling station in Venezuela.

The American technology company Voatz, which has used the technology in polls in West Virginia, Colorado and Utah, uses blockchain technology to secure the online survey.

However, the results will not be binding, as Maduro exercises control over the country’s institutions, including the Supreme Court, the electoral authority and the powerful military.

Some analysts believe that Guaido backed into a corner by boycotting the official election and thus risked losing the support of its international supporters.

“Guaido will lose his formal legitimacy as president of the National Assembly in January, when Maduro will consolidate total power,” Michael Shifter, president of the think tank Inter-American Dialogue, told AFP.

Speaking before the vote, Miami-based analyst Aquiles Este said Guaido also risked political irrelevance in the eyes of many Venezuelans.

“The opposition has never looked so weak in the eyes of the public,” Este told FRANCE 24. “Guaido arrived with a promise to chase Maduro out of Miraflore’s presidential palace, but he has been unable to do so.”

On Monday, Secretary of State Mike Pompeo said Washington would continue to recognize Guaido “and the legitimate National Assembly.”

“The international community cannot allow Maduro, who is in power illegally for stealing the 2018 election, to profit from stealing a second election,” Pompeo said in a statement.

He described Sunday’s election as a “farce” and an attempt to install a “complicated, puppet national assembly, just for Maduro”.

Britain called the election “deeply flawed” and said it continued to recognize Guaido as a parish speaker as well as Venezuela’s interim president.

Canada and the Organization of American States also rejected the result, while the European Union said the vote showed “lack of respect for political pluralism”.

However, Caracas’ ally Russia hailed the elections as more “transparent than in some countries, which usually present themselves as an” example of democracy “.