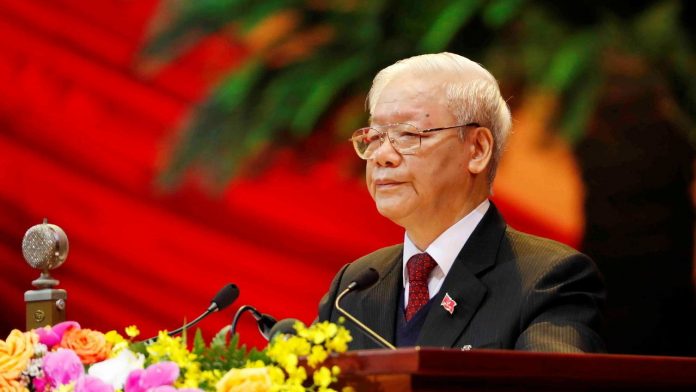 Vietnam’s ruling Communist Party leader Nguyen Phu Trong was re-elected on Sunday – a victory that makes him the most powerful leader in decades – but his victory was overshadowed by a serious coronavirus outbreak in the country.

Trong, a 76-year-old pro-China conservative who is rumored to be in poor health, got the nod after a week of closed talks at the Communist Party’s congress twice a decade. This will be his third term in office – an unparalleled achievement in Vietnam’s modern era.

Another part of Trong’s top job is seen as a boost to his high-profile anti-corruption campaign, officially called a “flaming furnace”, which has swept through the party, police and armed forces.

“We can expect Trong to continue to run” his campaign, which has claimed high-ranking party officials, including three members of the Politburo, said Carl Thayer, an emeritus professor at the University of New South Wales and an expert on Vietnam.

With transplants widespread in all government sectors, Trong’s anti-corruption efforts have largely proved popular with the Vietnamese public and many party members.

“We admired him for his determination and efforts to purge and cleanse the party,” said Nguyen Tran Trung, a longtime Communist Party member.

“Even though he is not in good health, his presence in a leading position still frightens bad cadres in the apparatus. He plays an important role in preserving the Communist Party,” the 78-year-old government official told AFP.

But for the regime’s opponents, the past five years have been marked by escalating repression, according to rights groups and analysts, who warned that Trong is likely to push forward with the effort during his third term.

Prisoners of conscience have doubled from 84 to 170 since the last congress in 2016, according to Amnesty International, which says that a large and growing proportion are imprisoned based on their expression online.

Trong, the first party secretary general who served a third term since the “doi moi” period of economic reform began in 1986, has also served as president since 2018.

At the moment he remains so, but will resign later this year when the National Assembly appoints a replacement.

This is expected to be Nguyen Xuan Phuc, currently Prime Minister, who has focused on the country’s economic growth and integration, securing a number of international trade agreements.

The 76-year-old has also controlled the country’s robust response to the coronavirus pandemic, which helped the case low, with only 35 deaths recorded.

The Hanoi Congress had wanted to showcase that achievement, but a new cluster near the capital last week ruined the celebration – forcing the meeting to end a day earlier than planned.

Authorities warned that the outbreak was the most serious so far.

By Sunday, Vietnam had registered nearly 1,800 cases of coronavirus, of which nearly 200 were registered in the past four days.

Authorities also confirmed the first case in Vietnam of the South African variant of an expert who arrived from the country in late December.

On Saturday, the Ministry of Health approved a vaccine made by AstraZeneca and continued to test thousands of people and lock down high-risk groups.

The last members of the country’s “four-pillar” leadership are expected to be Pham Minh Chinh – who is in line to become prime minister – and Vuong Dinh Hue as head of the National Assembly.

Chinh, 62, is the head of the party’s important Central Organization Commission and has strong ties with the police.