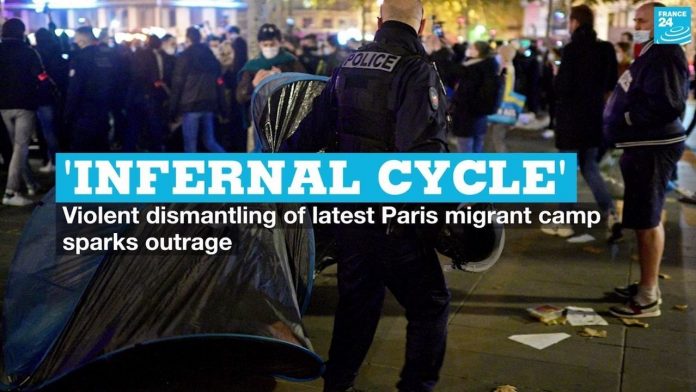 Images of French police violently displacing people from a migrating camp in central Paris have shocked and condemned politicians and NGOs. But aid workers say it is only the latest example of the “infernal cycle” that migrants face in the French capital.

The approximately 500 tents had been set up that night by volunteers and were quickly filled by migrants who were looking for a place to sleep, but were demolished just a few hours later.

Many of those who had set up camp on the Place de la République had previously lived in a larger camp in Saint-Denis on the outskirts of Paris.

A week ago, it was also dismantled by the police.

It is a pattern that has become familiar in the French capital: a migrant camp is set up only to be quickly demolished again and a new camp is set up elsewhere.

“The first thing we are asking for is obviously the protection of these people who should have already been protected with the evacuation of the Saint-Denis camp,” Kerill Theurillat, Paris coordinator at NGO Utopia 56, told AFP.

Police say they are legally offered alternative protection in France, but aid workers say such protection, often cramped gyms, is inadequate and inappropriate, meaning many will soon end up on the streets.

“There is a lack of housing … and the result is that all these people are still out on the streets, arriving every day.”