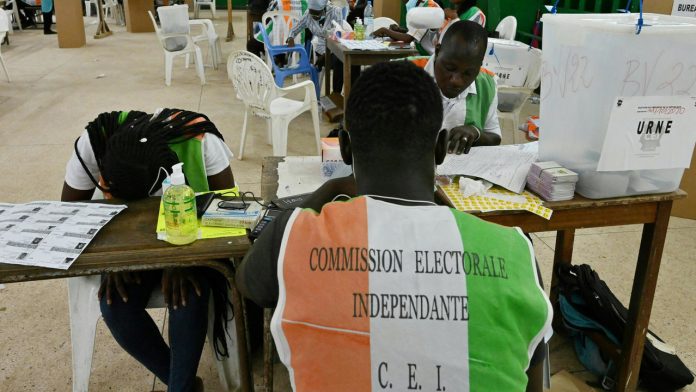 Ivory Coast citizens cast their ballots in a largely peaceful presidential vote on Saturday, but opposition calls to disrupt or boycott the process caused pockets of unrest in a tense standoff over President Alassane Ouattara’s bid for a third term.

The streets of the largest city of Abidjan were quiet and the vote went smoothly in most districts as opposed to the violent one up until the election. The vote is seen as a test of stability in the West African nation, which has one of the continent’s fastest growing economies.

“There was fear, but it did not stop us from getting out,” said businesswoman Djenebou Toure, who was sitting with her friends outside a polling station in the Adjame district.

Efforts to block the vote led to clashes and vandalism of polling stations in other parts of the country, although the opposition and authorities gave different reports on the impact of the disruption.

“Apart from a few isolated places – a dozen or so – the vote is going well,” Ouattara told reporters as he voted in Abidjan.

Out of over 22,300 polling stations, 30-40 were vandalized, according to the election commission.

The opposition said entire parts of the country had not participated in the vote or had been prevented from doing so.

Candidate Pascal Affi N’Guessan said they estimated that about 12 people had died as a result of civil disobedience campaigns.

A police spokesman said there was no immediate information on the number of injured. Clashes in the last 24 hours have caused at least one death, a police source said earlier.

Opponents of 78-year-old Ouattara say he is breaking the law by running again because the constitution limits presidents to two terms and jeopardizes hard-earned economic gains in the country, the world’s largest cocoa producer.

“Ivorians refused to participate in this farce in an election,” said N’Guessan, who called for a boycott with fellow candidate, former president Henri Konan Bedie.

Ouattara says he can run again under a new constitution approved in 2016, and does so only because his hand-picked successor died unexpectedly in July. He is seen as likely to win.

Voting closed as planned, and the counting of votes started shortly after noon. 18 (1800 GMT) according to Reuters witnesses in Abidjan.

Violence linked to the election has killed 30 people since August, bringing back memories of the presidential vote in 2010, which released a brief civil war that killed 3,000 people after Ouattara’s predecessor Laurent Gbagbo refused to resign.