Home World Was it really ‘no needle’ when Kamala Harris was vaccinated for Covid-19?...
Facebook
Twitter
WhatsApp
Linkedin
LINE 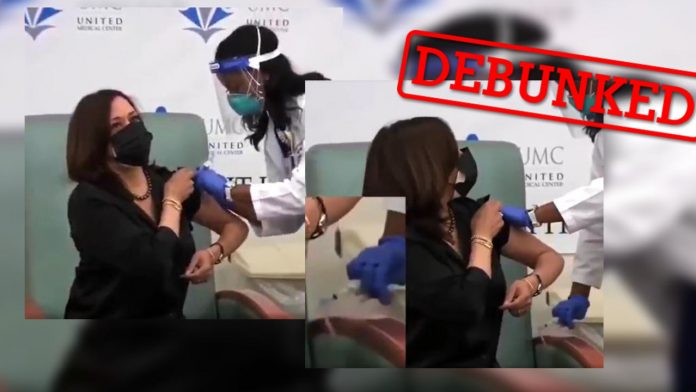 Conspiracy theories claiming that Vice President-elect Kamala Harris faked her Covid-19 vaccination have been circulating on Facebook and Twitter in several languages. Proponents of this theory claim that the syringe used to vaccinate her did not have a needle. But it turns out that the quality of the video has decreased, which makes the image blurry … and makes it easier to believe this incorrect information.

“Look very, very carefully”, “There is no needle” and “Politicians are pathetic when trying to stage a scene” are just a few examples of captions that French speakers have posted along with a video showing Harris getting the Moderna vaccine against Covid -19 on December 29th.

These conspiracy theorists offer a zoomed image that they claim shows that there was no needle in the syringe. They also point to a slow version of the video, which appears to show a pink part of the syringe bending. One of these posts was shared more than 3200 times.

Our colleagues on the Italian fact-checking site Open found the same video circulating on Facebook with a caption in Italian. It had been shared 1700 times. The video has also been uploaded to YouTube several times with English subtitles.

The video used in all these posts has extremely low quality film, which makes it impossible to clearly distinguish whether the syringe actually has a needle or not.

If you search for “Kamala Harris Vaccination” on YouTube, you can find the same images in better quality, shared by American media such as the Los Angeles Times (Note: In French it says Los Angeles Time, without “s”). Fourteen seconds into the video, when the nurse removes the cap of the syringe, you can see the needle clearly.

In the better quality pictures posted on YouTube, you can clearly see the needle in the syringe. © Los Angeles Times / YouTube

In the video on YouTube, om clearly distinguishes the eye in the ring. © Los Angeles Times / YouTube

But what’s the thing that looks like it’s made of pink plastic that seems to bend 19 seconds into the video? Italian media outlet Open explains that it is a safety mechanism made of plastic that helps to prevent neither the nurse nor the patient from accidentally injuring themselves during the injection.

Online, many discussed the pink cap on the syringe.

This screen grab, from the website Open.online, shows the plastic protective cap on the syringe which is withdrawn while Kamala Harris receives her vaccination.

A number of politicians from around the world have been publicly vaccinated in an attempt to encourage citizens to do the same. However, a number of these videos have triggered conspiracy theories, especially when people manipulate the film.