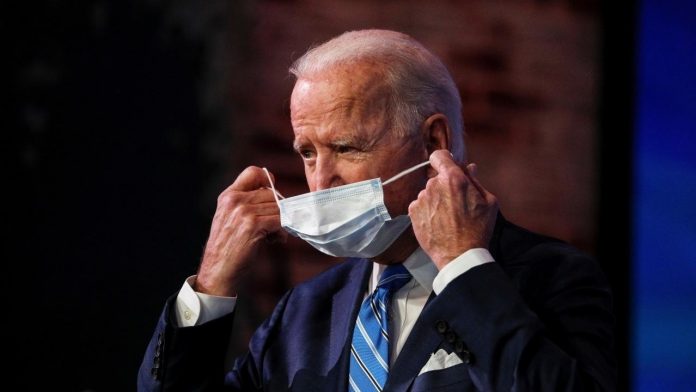 US President-elect Joe Biden will issue a series of executive orders following his inauguration at noon on Wednesday, as well as legislation that will quickly begin to work its way through Congress for pandemic assistance, immigration and more.

Biden, 78, has vowed to get started as he aims to tackle a worsening Covid-19 crisis, revive a pandemic economy and reverse many of his predecessor’s more controversial policies.

A top priority for the 46th US president is to secure congressional approval for his $ 1.1 trillion stimulus plan to revive the economy and administer 100 million vaccines for his 100th day in government.

Biden has promised on day one to extend a break on deportations and foreclosures as well as federal student loan payments. move to get the United States to rejoin the World Health Organization and the Paris Climate Agreement; lift a travel ban on those from several Muslim majority countries; order agencies to start reuniting families separated at the border; and mandate masking on federal property.

According to a memo released by incoming Chief of Staff Ron Klain, the new president will also take swift action on what the Biden administration sees as the four biggest challenges facing the United States. “We are facing four overlapping and complex crises: the Covid-19 crisis, the resulting economic crisis, the climate crisis and a racial stock crisis,” Klain wrote.

“During the first ten days of office, President-elect Biden will take decisive action to address these four crises, prevent other urgent and irreversible damage, and restore America’s place in the world,” Klain added.

Here’s what you can expect from his first 100 days in the White House.

Biden has described the US Covid-19 vaccine rollout as “a grim failure so far” and promised to “move heaven and earth to get more people vaccinated.” He has set his administration a target of 100 million shots at the end of his first 100 days as president.

Biden has promised to have 100 vaccination centers supported by federal emergency personnel running during its first month in the White House. He will also ask Americans to commit to 100 days of masking from their first day on the job.

The incoming president has said he will use the Defense Production Act to increase vaccine supply and ensure that the pandemic is under control for most public schools to resume nationwide by its 100th day in government.

The Democrat’s $ 1.9 trillion stimulus proposal provides $ 1,400 in direct payments to Americans to support the virus-hammered economy. Biden said that “the return on these investments in jobs, racial capital will prevent long-term economic damage, and the benefits outweigh the cost”.

“We can not afford passivity” in the economy: Biden presents plan to support pandemic economy

Biden has also promised to eradicate corporate tax cuts where possible, while doubling the fees that US companies pay for foreign profits. Another flagship policy includes raising the hourly wage to $ 15, double the current amount.

WHO, the Paris Agreement and Iran

Other promises of day one include moving to rejoin the World Health Organization and the Paris climate agreement, which Trump withdrew. Biden is also expected to begin the process of rejoining an international landmark agreement aimed at limiting Iran’s nuclear program.

US Presidential Transition: How Will Biden Change US Foreign Policy?

Biden has announced executive action on his first day in office to formulate a plan to achieve 100% clean energy economy and net zero emissions by 2050. He will also adopt an executive order “to preserve 30% of America’s lands and waters to 2030 “in line with other” 30% until 2030 “pledges made by 50 countries at a planetary summit in Paris earlier this month.

Biden is also expected to reverse President Donald Trump’s return to some 100 public health and environmental regulations introduced by the Obama administration.

The city’s hectic day schedule includes the creation of working groups for homelessness and the reunification of immigrant parents with children separated at the US-Mexico border. The incoming president has promised to provide a path to citizenship for 11 million immigrants who came to the United States illegally as children. He has also promised to lift the Trump administration’s travel ban on people from several Muslim majority countries.

Dreamers: Highly hope that the Biden administration will bring about immigration reform

Biden has vowed to lift a transgender military ban passed by his predecessor and restore the Obama-era guidance for transgender students in schools, saying it will protect “students’ access to sports, bathrooms and locker rooms according to their gender identity.”

He has also promised to set up a police monitoring commission to combat institutional racism at the end of his first 100 days.