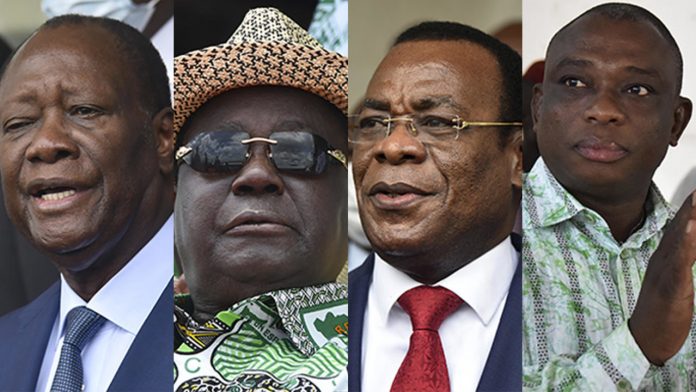 Côte d’Ivoire’s Constitutional Court ruled in September that only four of 44 presidential hopefuls would be allowed to run in the country’s presidential election on October 31.

Because they face criminal convictions, ex-president Laurent Gbagbo and former rebel leader Guillaume Soro, both giants of Ivorian politics, were among those prevented from running.

Most of the others whose candidates were deemed invalid had failed to garner sufficient public support – a new electoral reform required candidates to request signatures from at least 1 per cent of voters in 17 of the country’s regions in order to stand.

The rest will compete in the first round of elections on October 31st. It will be the biggest challenge to the country’s political stability since the 2010-11 election crisis.

President Alassane Ouattara’s bid for a third term has been rife with controversy. Opponents and legal experts point out that the Ivorian constitution limits the presidency to two terms. The government maintains that because the constitution was reformed in 2016, the number of expressions had to be set back to zero.

For years, Ouattara had suggested he would not run again. The 78-year-old had made repeated promises to hand over power to “a young generation”. He declared in March that Prime Minister Amadou Gon Coulibaly, 61, would contest the election in his place. But Coulibaly’s sudden death from a heart attack in July ruined his plans for his political legacy, and Ouattara was therefore forced to reconsider.

I salute the historic decision of the President @AOuattara_PRCI, Speaker and State, not to present the next presidential election. This evening, Côte d’Ivoire gives the example. https://t.co/oDcmBl1sNW

French President Emmanuel Macron congratulated Ouattara on his initial decision not to run for a third term.

After weeks of speculation, Ouattara made an address that was broadcast on state television and told the country he would drive again. “This decision represents a real sacrifice for me,” he solemnly declared.

The announcement sparked protests across the country, leading to at least 15 deaths in subsequent clashes between protesters and police.

Before entering politics, Ouattara worked as an IMF economist and served as governor of the Central Bank of the West African states. On the campaign track, he will love bragging about his president’s legacy of economic development. Since Ouattara took office in 2011 following a post-election crisis that claimed at least 3,000 lives, the country’s GDP has grown by an average of 8 percent annually (although the poverty rate remains high, 46.3 percent). Under his watch, the government introduced universal health coverage, built new roads, and massively expanded access to electricity massively.

“We are the only political group capable of guaranteeing the development and continued improvement of the standard of living of our citizens, in peace and security,” he told an encouraging crowd as he was sworn in as his party’s candidate.

In 2015, Ouattara won a landslide victory with 84 percent of the vote. This time it’s getting harder. He does not have the support of Henri Konan Bédié (who is without a doubt now his biggest challenger) and faces anger over the exclusion of Gbagbo and Soro from the race.

The 86-year-old president of the PDCI party is Ouattara’s main challenger. He is also the figure around which other opposition parties are likely to unite if the election were to go to another round. To opponents who say he is too old to drive, he insists: “Age is an asset”.

Bédié served as president of Côte d’Ivoire from 1993 to 1999. His presidency was marked by the embrace of Ivoirité – an xenophobic ideology used to discriminate against them of Burkinabe and Malian origin. Under the guise of Ivoirité, Bédié Ouattara, who was rumored to be from Burkina Faso, was barred from running in the 1995 presidential election.

After being thrown into a coup in 1999 – the first in the country’s history – he went into exile in France before returning to the Ivory Coast in 2002 during the outbreak of the Civil War.

After finishing third in the 2010 presidential election, Bédié urged PDCI supporters to back Ouattara in the second round in a ultimately successful attempt to remove Laurent Gbagbo from power.

In 2015, his party supported Ouattara again, this time from the start, helping the RHDP win a landslide. A number of PDCI members were given ministerial posts in the government and continue to occupy them even after the alliance fell apart in 2018.

During the 2020 election, there are signs that Bédié has been successful in building new alliances. On Sunday, he held a meeting with the participation of parties whose candidates have been prevented from competing by the Constitutional Court. Flanked by delegates from the FPI party’s pro-Gbagbo wing and Guillaume Soros’s GPS party, he called for civil disobedience in response to Ouattara’s “violation” of the constitution. He was greeted with fierce applause.

Bédié has called for the return of all exiles and the release of all remaining political prisoners from the crisis following the 2010-11 elections. He has also, paradoxically, promised to lower tax rates and increase public spending.

Despite finishing second in the last presidential election, Pascal Affi N’Guessan is facing a difficult campaign.

The 67-year-old former prime minister is the ‘official’ leader of the FPI – the left-wing party created by Laurent Gbagbo. After Gbagbo was sent on charges of crimes against humanity by the International Criminal Court in 2011, the party split in two.

Gbagbo loyalists created the so-called ‘Gbagbo or Nothing’ faction and boycotted previous elections, refusing to recognize Affi N’Guessan as a legitimate replacement for the party’s founder.

N’Guessan has said he would welcome Gbagbo back from exile, but argues that until that day comes, he must lead the FPI to elections. He has dismissed the ‘Gbagbo or Nothing’ wing as “continuing in the logic of the dissident”.

Affi N’Guessan was not invited to Bédié’s opposition meeting on Sunday, but has joined those who condemn Ouattara’s third term as constitutional, and describe the current government as a “dictatorship”.

His chances of winning the first round are slim – especially if the ‘Gbagbo or nothing’ wing keeps its promise not to boycott this election and then throws its weight behind Bédié.

In all likelihood, N’Guessan’s influence will be limited to whether he also decides to back the PDCI or not – if he chooses not to do so, Ouattara’s chances of a third-term victory could be higher.

Lovingly known as KKB, Kouadio Konan Bertin once had great ambitions to stand as a candidate for PDCI. But after falling out with Bédié in 2015, he decided to run as an independent and came in third in the election.

Konan Bertin tried to win the nomination to stand for PDCI going into this election. He referred to Bédié in an interview with Jeune Afrique: “He himself said in 2010 that he had fought his last match. In 2020, this may still not be his last match! He also acknowledged that he was not sure if he still had the strength to lead a government. In 2010, he was not even able to take part in a televised debate to defend his program in front of the Ivorian people. ”

He was eventually rejected by the party. The 51-year-old former MP now stands as the only independent candidate in the election.

Forty percent of the Ivorian population is under the age of 15. The CCP stands as a new face alternative to the other three candidates, who have an average age of 77 and have long dominated Ivorian politics.

His campaign slogans include “Reform, Reconciliation, Redistribution” and “Together create the conditions for real change”. Winning more than 3.1 percent of the vote (his result in 2015) and translating those words would be difficult without the support of the major parties’ electoral machinery.