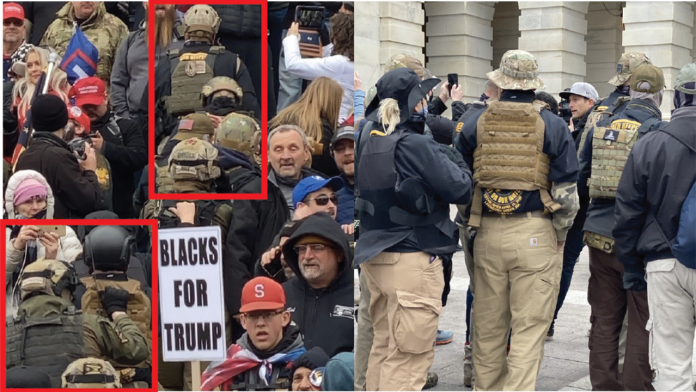 In the aftermath of the January 6 attack on the US capital by a crowd of pro-Trump insurgents, a Twitter video published on January 10 caught the eye of social media trying to identify the perpetrators of the attack. In it, a number of men equipped with combat helmets, bulletproof vests and radios move steadily up the Capitol steps among cheering protesters. They are members of the Oath Keepers – one of the largest radical anti-government militia groups in the United States preparing for a civil war.

This Twitter video of the Capitol attack on January 6 shows a row of men with tactical gear climbing the stairs at the Capitol before the building was stormed.

“When the doors to the Capitol were crowded, I saw many militia members in the audience.”

James Townsend, an independent photojournalist who was at the Capitol, recounts what he saw when it came to militia activity:

Militia members were very present all day. I always saw Oath Keepers together in bellows with about ten members, sometimes moving with one hand placed on the shoulder in front of them so that they could not be separated. They were the only group I saw who wore their militia names on their vests, shirts and helmets as uniforms. I also saw some people who had three Percenter brands. Other groups seemed to function in pairs without identification.

Twitter photos of the January 6 assault on the Capitol show the Oath Keepers in a human chain ascending to the Capitol building, identifiable with their Oath Keeper jackets and notes.

This group of oathkeepers had been inside the Capitol. They gathered in uniform which they gathered outside and strategized. They wore helmets, knee pads and gloves with knee pads. Notice the guy carrying the big pole. I saw several of them. pic.twitter.com/L9V2MtJvOd

The militia members were equipped with radios, mostly military helmets, bulletproof vests and filter masks and goggles in preparation for tear gas. Some also had cameras in their vests connected to a power bank. They usually wear politically related patches on their vests, such as the popular yellow flag “Do not step on me”. [Editor’s note: Also known as the Gadsden flag, a symbol that has been adopted by conservative and far-right groups.]

A Twitter image shows a group of three percent at the Capitol, who can be identified with the “III” patch. The militia member also appears to have a Gadsden flag flying.

When the Capitol’s doors broke, I saw many militia members in the audience. I also saw a member who had a broken flagpole as a club. Other than that, I personally did not see any militia violence.

In a picture by photographer Saul Loeb, which is largely shared on social media, militia members take pictures in the atrium of the Capitol. © Twitter

In most other protests or events that I have witnessed in DC, people are urged not to come up with any kind of flagpole or stick without holding signs and flags on their own. This was the case during the women’s march the day after Trump’s inauguration in 2017. So I was surprised to see so many flagpoles, given that other groups have been forced to give them up because they could be possible weapons.

Like many right-wing extremist groups trying to distance themselves from taboo politics, the Oath Keepers are deliberately shrouded in ambiguity. The organization describes itself as non-partisan and not a militia “in itself”. But in a 2020 interview with The Atlantic, founder Stewart Rhodes called on members of the group to defend a “rebellion” against the outgoing president Trump in a country he says has already entered a civil war. This also fits in with the organization’s broader promise to “support and defend the US Constitution against foreign and domestic enemies” and other threats based on conspiracy theories such as the so-called socialist “New World Order”. A membership list reviewed by Atlanten 2019 counted 25,000 people.

The Three Percenters, an American-Canadian movement of armed extremists who see themselves as the modern equivalent of the 3% of American patriots of the revolutionary era believed to have taken up arms against the British, have also associated with Eath Keepers in armed deviations. against government agencies. Although identifying as non-partisan and non-racist, a Canadian military report on hate and racist groups says the group “has anti-Muslim, anti-government views reinforced by right-wing conspiracy theories,” as evidenced by armed confrontations and acts of terror against Muslim Americans.

Given the sharp rise in extremist recruitment since the Capitol takeover, as well as the recently shut down website Parler for right-wing social media, many fear that right-wing extremist militias and other Trump groups will mobilize even more intensively in the leading days leading up to Joe Biden’s inauguration on January 20th. An FBI bulletin obtained by ABC News warned of armed protests in all 50 state capitals in the event that President Trump was removed before inauguration day. Trump supporters in Parler’s “lifeboat” channels formed on other platforms said the inauguration would be watched by “8 million snipers” and urged users to “pick up weapons and show off”.

A “Million Militia March” has also been planned by Trump partisans in Washington DC on January 20. A commentary during an advertising poster for the march against Parler read, in all caps, “We have planted this earth with our blood and we must take it back, if necessary by force.”