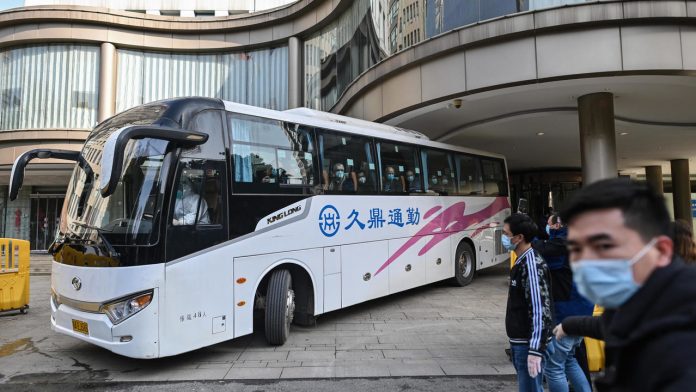 A team of World Health Organization experts quarantined in Wuhan on Thursday to launch a heavily investigated probe into the origins of the Covid-19 pandemic, after Washington called for a “robust and clear” investigation.

The group started a two-week quarantine on arrival on January 14 in the central Chinese city where the first known cluster of virus cases emerged in late 2019.

In masks, they watched the waiting media from the window of a bus showing them from quarantine to another hotel on Thursday – although it was not immediately clear when and where their investigation will begin.

“So proud that we have graduated from our 14 days … no one went very crazy and we have been very productive,” tweeted team member Peter Daszak, president of the EcoHealth Alliance, a global non-governmental organization focusing on infectious disease prevention.

Day 14 of our quarantine in Wuhan !! Slightly sorry to say goodbye to my “gym” and my “office” where I have been hollowed out for the past 2 weeks !! (Clues – everything is in the same room …). We move on to the next work phase w / @WHO mission team & China equivalents. pic.twitter.com/SC75H70WMK

The virus is believed to have come from bats and that it originally spread from a wet market in Wuhan where wild animals were sold as food.

The WHO insists that the visit will be closely linked to the science of how the virus – which has killed more than two million people – jumped from animals to humans.

But as a sign of the political baggage of their mission, US President Joe Biden’s new government weighed in before experts even quarantined.

Speaking to journalists on Wednesday, the new White House spokeswoman Jen Psaki said it was “absolutely necessary that we get to the bottom” of how the virus appeared and spread around the world.

Psaki expressed concern about “misinformation” from “some sources in China” and called for a “robust and clear” probe.

Beijing struck back on Thursday, warning the United States to “respect facts and science, respect the hard work” of WHO experts.

But in a mission lost by delays and confusion from its Chinese hosts, it was not clear what the expert group will see in Wuhan – or what useful evidence remains a year after the outbreak in a country that has vigorously controlled the story of how the pandemic began.

The first days of the outbreak are still one of the most sensitive topics in China today, with the communist leadership trying to eradicate all discussions that show its governance in a bad light.

Beijing has also tried to erase doubts in its origins, and the indefinite theory that the virus originated elsewhere is floating.

Another theory, reinforced by former US President Donald Trump, is that it was leaked from a laboratory in Wuhan where researchers studied coronavirus.

Relatives of Wuhan’s killed coronavirus have called for a meeting with the team from the UN Health Bureau and say they have faced new levels of official obstacles since the WHO team arrived.

According to official Chinese figures, the virus killed nearly 3,900 people in Wuhan, accounting for the vast majority of the 4,636 deaths reported by China.