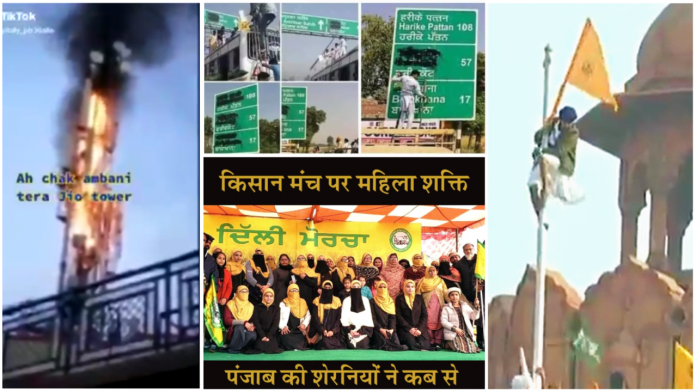 Farmers across India have been protesting since October, expressing their anger at new agricultural bills that would make them vulnerable to falling food prices. Social media has flooded with fake news trying to portray the protesters as violent or claiming to be led by Muslim extremists.

Protests have been held across India against Farm Bills, a new series of proposed agricultural laws that would loosen the rules on the prices of products, which means that farmers are losing price protection that currently exists. Farmers are afraid that the minimum price for basic foods such as wheat and rice may fall at the end of the fixed prices.

On January 12, after two months of protests, the farmers were able to have the bill put on the Supreme Court. This first victory did not serve to calm the protesters, who continued to gather in New Delhi and blocked highways.

However, the Indian government seems determined not to give in. Prime Minister Narendra Modi’s nationalist Bharatiya Janata Party (BJP) has made repeated claims that the peasants are controlled by the opposition and that they are violent.

In this regard, a tidal wave of false information about the protests has swept across social media. The Indian fact-checking site BoomLive.in recently compiled a list of more than 63 fake news about the protests that have been circulating online.

Old videos used as “evidence” that the protesters are violent or destructive. Some of the most widespread fake news claims that the farmers have destroyed food or damaged public property.

This video was posted on Facebook and Twitter on January 18th. The caption claims that the man in the video puts water on sacks of wheat, apparently to make them “rot” (or, more precisely, ferment) so that wheat can be sold to “breweries and distilleries”. Internet users claim that this video was filmed in the state of Punjab. It is true that many protesters are farmers from this region. The majority are Sikh.

FCI repositories with wheat purchased at MSP. This is the scene of Punjab. Water is sprinkled on wheat bags to make the grain rot and it is then sold to distilleries and breweries by the 5-star farmers who are on the Delhi border. com / t2Ed0URep3

The Indian fact-checking website BoomLive.in reported that the video is actually from 2018 and was filmed in the state of Haryana in northern India. The man in the video, who lives in Fatehabad, was caught and put water on his wheat, not to destroy it but to increase the weight of each bag and thus his profit.

In late December, someone posted a video of a burning telephone pole on Twitter, claiming it was needlework by protesting farmers.

It turns out, however, that the video is actually from 2017. Several media at the time reported that Poland burned by mistake.

Although this video was not filmed during the recent protests, it is true that people protesting against Farm Bills destroyed about 1,500 telephone poles, many in Punjab.

There have also been widespread claims that the peasants are actually rising up against the Hindu population. As evidence, some social media users have circulated a photo that probably shows farmers destroying Hindi writing on signs.

Again, this picture was taken out of context. We ran this image through a reverse image search and found the same photo in articles from 2017. A Sikh extremist group covered over words in Hindi and English on street signs and demanded that they be replaced with words in their secret Pendjabi, reported Boomlive.in.

“60% of fake news discredits the movement, while about 40% glorifies it”

Archis Chowdhury is a journalist at BoomLive.in, where he analyzes some of the most serious examples of fake news circulating online. For example, he investigated allegations that Indian Muslims were responsible for bringing Covid-19 to India, a fake news campaign called #CoronaJihad. He now focuses on the peasant movement.

When the peasants began to protest, no one could have imagined that it would last that long. We are currently witnessing one of the longest and most intense protest movements in recent decades. And it naturally arouses media attention and thus disinformation.

Of course, as is often the case, people will take the opportunity to despise Muslims. The main theme of most fake news is that Muslims have infiltrated and hijacked the movement.

This latent xenophobia and Islamophobia, which is outraged by politicians and some media outlets, has not surprisingly raised its head during these protests.

For example, many people have shared a photo online showing a group of women wearing cans under the heading “fake farmers”. The photo was published together with the caption #FarmersProtestHijacked, which suggests that Muslim political parties had infiltrated the movement.

But as BoomLive reported, the real story is different. The women in the picture are not farmers themselves. However, this group visited the Punjab office in Bharatiya Kisan Union – an apolitical organization defending farmers in India – to offer its support on 14 January 2021.

But we also see new forms of false information circulating online. Hindu nationalists have taken advantage of the fact that many of the peasants participating in this movement are Sikhs from Pendjab and Haryana. Some Hindu nationalists have accused the peasants of flying the Khalistan flag – which represents a separatist movement demanding the creation of a Sikh nation – instead of the Indian flag. [Editor’s note: on January 26].

I must add that it is difficult to make an argument that Sikhs are not good citizens. Traditionally, they form a large part of the Indian Army.