Home World Workers are allowed from the cold to lunch when France relaxes the...
Facebook
Twitter
WhatsApp
Linkedin
LINE 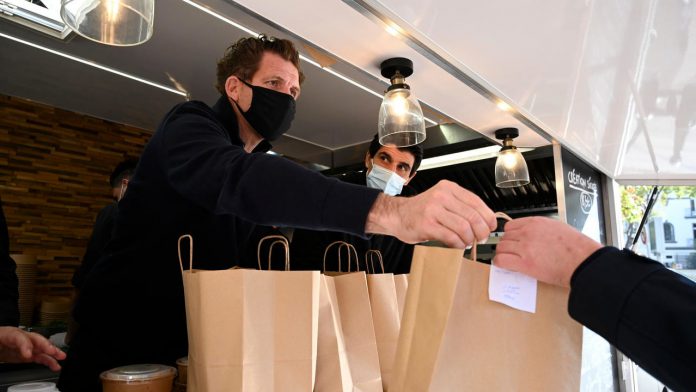 If delicious meals are part of the national identity, they are also an important part of daily life in France. No rushed sandwiches at the desk here. The French cherish their long lunches in eateries or cafes – or so they did before Covid-19 ended it. But new measures make it possible for some workers to take a warm-up dinner break.

With restaurants and bars closed in France due to Covid-19 restrictions, people have found new ways to feed themselves. Those who work from home now cook themselves instead of eating in company canteens or restaurants. But what about those who work outside? Now that it’s winter and the temperature has dropped, eating on a park bench does not have exactly the same appeal.

To address the problem, the government recently passed a law allowing municipalities to open their multifunctional rooms to construction and public utility workers looking for a warm place to eat. The measure applies to “people who are exposed to difficult working conditions, outdoors, when weather conditions require special protection.” Of course, sanitation must be respected and the government has urged locals to move meals and ventilate the rooms between groups.

Companies must then formally request access for their employees from local mayors who state during which period they want to be able to use the facility and for how many employees.

Some areas in France have gone even further. In the Creuse region, for example, restaurants are allowed to serve these workers if they follow specific sanitation protocols. However, the process is quite difficult. First, the restaurant must sign an agreement with local authorities certifying that they meet all safety standards, and then they must sign an agreement on collective catering services with individual companies. To date, about 15 restaurants in the region have completed the process, allowing them to serve lunch Monday through Friday, according to France 3.

The change was welcome for workers who had taken meals and eaten them outside or in their cars and trucks. Clement Besson, a logger, took advantage of the special determination on Monday and had lunch at Le Victoria restaurant in Saint-Vaury. It was a big improvement over eating in his car – even with the heat on.

“During the first shutdown, it was spring, so it was pretty hot,” he said. “But the other containment…. it’s pretty cold. ”

And the benefits extend beyond just having a warm place to sit. With open restaurants, workers can do things as basic as wash their hands, Besson said.

Muriel Chevillion owns Le Victoria with her husband, Philippe. He cooks and she serves. She said they do a fraction of their regular lunch business, but being open allows them to keep their ties to their customers. Putting a plate of food in front of someone is not the same as bringing or delivering, which they have also done, she said.

“I rediscovered the pleasure of serving,” she said after the second day of lunch customers, who were separated by plexiglass dividers. “Everyone smiled, people were joking.”

The shape of the things to come?

The national initiative revealed an old fault line between workers and companies. Union officials said they did not think the provision should be temporary.

“Eating out has always been a concern for employees,” said Frédéric Mau, federal secretary of the CGT Construction Union, in a statement, pointing specifically to the cost of eating out every day. The union would like to see “living bases” built on construction sites and went on to say: “The investment in a microwave oven and a refrigerator cannot pose a threat to the company’s financial health.”

Didier Brosse, chairman of the BTP Loire industry group, sees things differently. “It’s a false good idea,” he told the regional newspaper Le Progrès. “It’s a waste of time and a burden for workers who learned to eat in half an hour.” The proposal is not without danger, he said. “How about the maintenance of these rooms and the risks of car accidents on the way there?”

Brosse said there are more pressing issues to address, citing “the decline in productivity due to barrier gestures and the extra cost of supplies to combat Covid”.