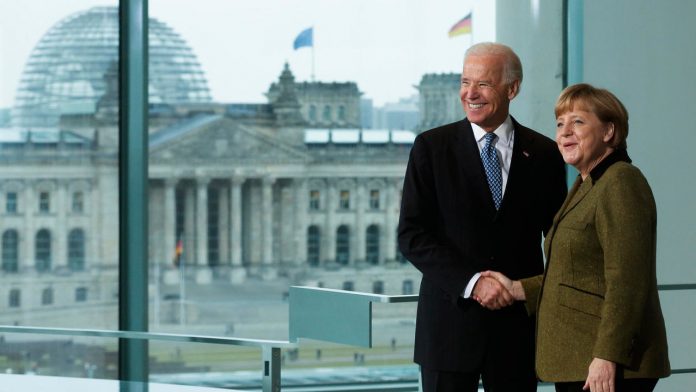 World leaders on Sunday hailed Joe Biden’s election as President of the United States as a chance to improve cooperation on climate change, coronavirus and other problems after four years of President Donald Trump’s rejection of international alliances.

While Trump refused to accept the election results, Western and Asian allies expressed hope for a fresh start after Trump’s “American First” trade policy, withdrawal from the Paris climate agreement and attacks on NATO and the World Health Organization.

In Asia, a region at odds with the strategic ambitions of China’s ruling Communist Party, elected leaders in Japan, South Korea and Taiwan shared “shared values” with Washington and expressed hope for close ties.

Warm congratulations to @JoeBiden and @KamalaHarris. I look forward to working with you to further strengthen the Japan-US Alliance and ensure peace, freedom and prosperity in the Indo-Pacific and beyond.

“I look forward to working with you to further strengthen the Japanese-American Alliance and ensure peace, freedom and prosperity in the Indo-Pacific region and beyond,” Japanese Prime Minister Yoshihide Suga said on Twitter. President Moon Jae-in of South Korea said he looked forward to working together “for our common values.”

Word of the victory in Pennsylvania that drove Barack Obama’s former vice president past the threshold of 270 ballots needed to take over the Oval Office is spreading worldwide, sparking celebration.

There was no immediate official response from Beijing, which is embroiled in conflicts with the Trump administration over trade, security and technology. But Chinese social media users welcomed the change. A post on the Sina Weibo microblogging service, signed by Gong Teng Xin Yi, said: “Congratulations to Biden, the old friend of the Chinese people on winning the election.”

After Trump said he won “a lot”, the Communist Party’s newspaper People’s Daily responded on Twitter with: “HaHa.”

President Tsai Ing-wen of Taiwan, the self-governing island of Beijing, claims it is part of its territory, expressing hope for “promoting our friendship.” Biden had congratulated Tsai on her re-election in January and said that Taiwan is “stronger because of your free and open society”. Washington has no formal relations with Taiwan, but Trump raised the profile of informal contacts by sending cabinet officials to the island, an act that irritated Beijing.

Now it’s my turn to congratulate @JoeBiden & @KamalaHarris on the election of president & VP-elect. The values ​​on which we have built our relationship cannot be stronger. I look forward to working together to promote our friendship and our contributions to society as a whole. https://t.co/xIvit7emjH

There was also no immediate reaction from Russian President Vladimir Putin, who was friendly with Trump. Other leaders who supported Trump, including President Rodrigo Duterte of the Philippines, congratulated Biden and indicated that they rejected Trump’s claim that the election was not over. In addition, Duterte expressed hope for improved ties based on “shared commitment to democracy, freedom and the rule of law”.

Iranian President Hassan Rouhani called on Biden to “compensate for past mistakes” and return the United States to Tehran’s nuclear deal with world powers in 2015, a state news agency reported on Sunday.

“An opportunity has now arisen for the next US government to compensate for past mistakes and return to the path of following international agreements by respecting international standards,” the state IRNA news agency quoted him as saying.

Iran’s Senior Vice President Eshaq Jahangiri wrote on Facebook: “Trump’s era and his long-standing and adventurous team are over.”

The Iranian newspaper Resalat published pictures of Trump without a mask against the coronavirus and Biden with a mask and said: “A maskless enemy left, a masked enemy arrived.”

Most Western allies welcomed a fresh start with Washington. Many have been appalled by Trump’s criticism of decades-old military and economic alliances.

“We want to work in our cooperation for a new transatlantic start, a New Deal,” German Foreign Minister Heiko Maas said on Twitter.

Others expressed hope that Biden would revive cooperation on health, climate and other issues following Trump’s rejection of the proposed Trans-Pacific Partnership trade agreement and pressure on Canada, Mexico, South Korea and other partners to renegotiate trade terms.

Congratulations, @JoeBiden and @KamalaHarris. Our two countries are close friends, partners and allies. We share a relationship that is unique on the world stage. I’m really looking forward to working together and building on that with both of you.

“I look forward to working with President-elect Biden, Vice President Harris, their administration and the United States Congress as we tackle the world’s biggest challenges together,” Canadian Prime Minister Justin Trudeau, who was the target of Trump’s personal insults, said on Twitter .

Australian Prime Minister Scott Morrison told reporters he was looking forward to a “big partnership” with Washington. He cited challenges including the coronavirus and “ensuring a free and open” Indo-Pacific region, referring to China’s disputes with its neighbors over control of large seas.

“American leadership is indispensable to meeting these challenges,” Morrison said.

Congratulations @JoeBiden & @KamalaHarris. Looks forward to President Elect Biden’s global summit on democracy and working with him to stop illegal tax havens and the stealth of the nation’s wealth of corrupt ldrs. We will also continue to work with the United States for peace in Afghanistan and the region

The Americans have elected their president. Congratulations @JoeBiden and @KamalaHarris! We have a lot to do to meet today’s challenges. Let’s work together!

Embattled Venezuelan President Nicolas Maduro and his US-backed rival Juan Guaido congratulated both Biden and Harris. Maduro said Venezuela, which is under crippling US sanctions aimed at forcing him out of office, was “ready for dialogue and understanding” with the United States.

The election result drew mixed reviews in Iraq, with Biden remembered as a mastermind of the 2003 US invasion. Still, Iraqi President Barham Salih described Biden as a friend and trusted partner.

Congratulations to @JoeBiden and @KamalaHarris on winning the US election. Our sincere wishes for the further development and prosperity of the American people. The United Arab Emirates and the United States are friends and allies with a strong historical partnership that we look forward to strengthening together.

Crown Prince Mohammed bin Zayed Al Nahyan of the United Arab Emirates, who was close to Trump’s son-in-law, Jared Kushner, expressed his best wishes to Biden and Harris on Twitter.

Indian Prime Minister Narendra Modi, who has been known for public bonhomie shows with Trump, shared a photo of himself with Biden and offered his congratulations “on your spectacular victory!”.

Congratulations @JoeBiden for your spectacular victory! As a VP, your contribution to strengthening Indo-US relations was critical and invaluable. I look forward to working closely together again to increase relations between India and the United States. pic.twitter.com/yAOCEcs9bN

British Prime Minister Boris Johnson, another Trump ally, said he looked forward to “working closely together on our common priorities, from climate change to trade and security”.

Harris inspired elections in parts of Africa for more women in government.

“The time has also come to give our women the chance to occupy such a high office in our country and even the leading position,” Nigerian Prime Minister Festus Keyamo said on Twitter.

Others expressed hope that Biden would help heal divisions in American society and global politics.

“He seems open to accepting people’s different views and wants to move forward in a unified way,” said Mika Goto, a preschool employee in Tokyo.

While the pronounced disappointment was scarce, several prominent leaders who have maintained warm relations with the Trump administration held.

Congratulations @JoeBiden and @KamalaHarris. Joe, we’ve had a long and warm personal relationship for almost 40 years, and I know you as a great friend of Israel. I look forward to working with both of you to further strengthen the special alliance between the United States and Israel.

Israeli Prime Minister Benjamin Netanyahu, whose Twitter profile showed him sitting next to Trump, described Biden as a friend of Israel and said he looked forward to working with him and Harris to “strengthen the special alliance” between their countries. In a separate statement, he thanked Trump for raising US-Israel relations to “unprecedented heights.”

Many people, especially in countries with turbulent policies, felt that Biden’s gains improved the prospects for respect for democracy.

Among them was Tanzanian opposition leader Zitto Kabwe, who was arrested and charged with terrorism-related crimes following his country’s bruises in the presidential election.

“This victory symbolizes the hope for democracy at a time when many other parts of the world are seeing the light diminish,” Kabwe said.

The result inspired mistrust in Slovenia, the homeland of first lady Melania Trump. Prime Minister Janez Jansa was the only leader to congratulate Trump even before all the votes were counted and to show support after Biden’s victory was announced.